Let plants do the work, it's time to plant fall cover crops 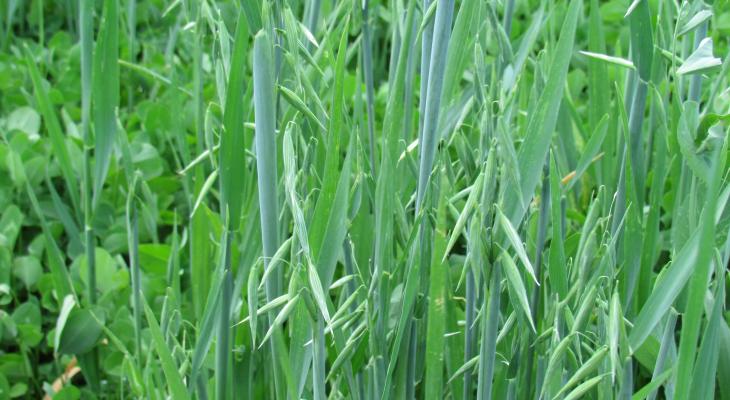 Illinois vegetable growers are entering the toughest six weeks of the year. Despite the seasonal demands, soil health depends on timely planning of a fall cover crop.

A fall cover crop is planted in August, grows in fall, and terminates after several hard frosts in winter.

How to select, plant, and grow cover crops

For optimal germination and growth, consider the cover crop species selection, planting and termination schedule, as well as soil conditions.

A fall cover crop of oats (Avena sativa) and field pea (Pisum sativum) offer high rates of success regardless of a farm’s experience with cover crops. Both oats and field pea are quick to germinate in most soil conditions and grow quickly to establish a living mat of organic matter that suppresses weeds.

Once established, the grass’ roots (oat) break up hard subsoil while the field pea (legume) adds nitrogen (N) to the soil. This slow-release source of organic N will feed next year’s cash crop with less additional fertilizer input.

In Central Illinois, seeding time for a fall cover crop is August 1 to August 15.

For many growers, this timeline is sub-optimal, some would say impossible. However, eight to 10 weeks of growth is recommended to ensure an even, quick coverage of a cover crop before termination by hard frosts. Based on your production schedule, consider interplanting, or planning seasonal rotation of vegetables and cover crops.

For successful germination and establishment of this fall’s cover crop:

Cover cropping with rotation and interplanting

Seasonal rotation of vegetable and cover crop plantings can be achieved in a few different ways.

One method is interplanting cover crop seed into an existing vegetable crop stand when production in those fields begins to wane. When interplanting into a crop stand, broadcast cover crop underneath rows of peppers, tomatoes, eggplant, and other warm-weather crops that will soon be removed or cut down. Overseed to account for increased likelihood of poor seed to soil contact, and water every other day for two weeks to improve germination and establishment.

Pull out and plant

For crop stands that wane by early August, due to production decline and pest or disease pressure, pull out crop stand then plant the area with cover crop.

In early to mid-August, pull out tomatoes stressed by pest and disease pressure, or short-season varieties with declining production. Good candidates for removal are heirloom varieties with poor resistance to Septoria Leaf Spot and paste tomatoes whose production has dwindled substantially.

ABOUT THE AUTHOR: Nick Frillman is a Local Foods and Small Farms Educator serving Livingston, McLean, and Woodford Counties. A fourth-generation graduate from University of Illinois, Frillman has a B.A. with a double major of Political Science and Spanish and a M.S. in Crop Science with a focus on crop production. Before joining Illinois Extension, Frillman completed a field season of CSA and farmers’ market-style production at a small “beyond-organic” vegetable farm in Sandy, Oregon.

ABOUT THE EDITOR: Liz Repplinger is the Agriculture and Natural Resources Program Coordinator serving Livingston, McLean, and Woodford Counties. A Bloomington-Normal native, Liz earned a B. A. in Animal Science and an M.S. in Animal Science from Illinois State University. She has enjoyed contributing to the multiple facets of Extension including previous support of the 4-H Youth Development Program as a program coordinator and current support of Unit and Statewide Diversity, Equity and Inclusion Initiatives.