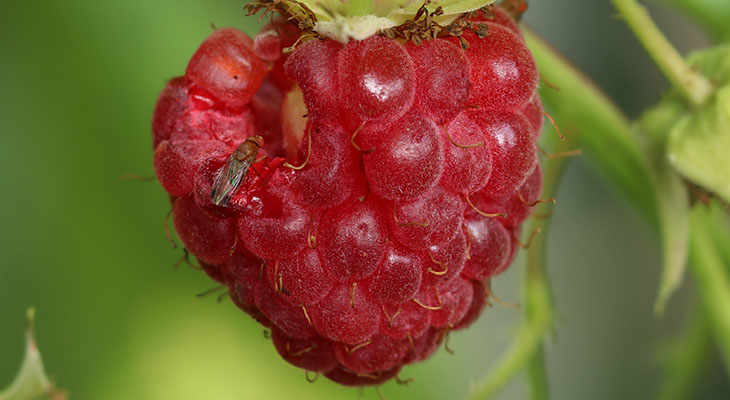 In our increasingly globalized society, invasive species have become somewhat of a way of life as we continuously intermix the world’s biota. Plants and animals from other continents tend to find their way to our landscapes and often are here for good.  As a gardener, it’s difficult to keep up with the pace at which new invasives pop up.  It’s even more difficult to figure out what these invasives mean to our home gardens and how they may impact our future plant choices.

The spotted-wing drosophila (Drosophila suzukii) is a small, invasive vinegar fly from East Asia with huge implications to commercial growers, but remains one that I have yet to discover in my home garden.  For that reason, I’ve been aware of this invasive, but relatively unfamiliar with our current understanding of this pest.  Back in January, I attended the Illinois Specialty Crops, Agritourism and Organic Conference in Springfield and was pleased to get an update on this invasive insect from a researcher right here in the Midwest.

Dr. Christelle Guédot, with the University of Wisconsin, presented findings from research at her lab in Madison, filled with excellent information on potential host plants, control measures and other aspects of how this pest overwinters and spreads.

The spotted-wing drosophila appears similar to an average vinegar fly with the naked eye, but upon closer inspection it has a specialized egg laying structure, called a sclerotized ovipositor, that allows it to tear open the skin of softer fruits and lay eggs within them.  Another major difference from other fruit flies in Illinois is that this pest will lay eggs in perfectly healthy fruit causing major damage over several days as the eggs hatch and larvae begin to feed.  Other fruit flies typically lay their eggs in damaged or rotting fruit since they don’t have a specialized ovipositor to break the skin of healthy fruits.

As eggs hatch (in about 12 to 72 hours) and larvae begin to feed, damage is visible as soft, slightly discolored spots initially, which become progressively worse as the larvae consume the fruit from the inside.  The larvae feed for about 5 to 7 days before pupating outside the fruit, with the majority dropping to ground to complete the process.

“There are many potential hosts, but the primary hosts we have documented would be raspberry, tart cherry, strawberry (after harvest), blueberry, blackberry, grape (when already damaged) plus all the other non-crop species associates with spotted-wing drosophila,” said Dr. Guédot.

As you can see, there is a wide range of commercially important, soft-bodied fruits that are impacted by the spotted-wing drosophila.  Perhaps a larger compounding factor on its spread is that over 40 wild hosts have been identified, meaning the spotted-wing drosophila can reproduce and spread via their fruits as well.  The long list of wild hosts includes many common plants such as our native dogwood, mulberry, persimmon, pawpaw and viburnum species, as well as non-native or invasive species such as autumn olive, honeysuckle, and burning bush.

With such a wide range of hosts, the spread of this species is inevitable where climatic conditions are favorable.  Currently, the spotted-wing drosophila has been confirmed in 26 Illinois counties since its first detection in 2012.

“Although we have only detected the spotted-wing drosophila in 26 counties during our surveys, it is suspected to be present in much of the state,” said Estes.

Given the widespread distribution in Illinois and the anticipation of a statewide presence, what are the implications of this pest for home gardeners?  In the future, we can expect damage on all soft bodied fruits listed above and including other common garden crops with soft skins, such as tomatoes.

For home gardeners, monitoring for damage will be the first step, followed by some simple cultural practices to limit the infestation.  Harvest fruit regularly and remove all overripe fruit, both of which will limit subsequent generations of spotted-wing drosophila.  Additionally, fruit should be refrigerated immediately after harvest.  This practice will limit the growth of any eggs already laid in the harvested fruit, likely preventing the hatch of larva.   There are no known health risks associated with consumption of eggs or larva and nothing wrong with a little extra protein, right?  Finally, keeping shrubs well pruned and the use of drip irrigation can limit infestation as the spotted-wing drosophila prefers a humid environment.  There are effective spray treatments which can be employed if the above cultural practices are not sufficient.

The Illinois Natural History Survey has a fact sheet with excellent details on monitoring and control of this pest, available at: go.illinois.edu/SWD.   For additional information, please stay tuned to the Home, Yard, Garden Pest Newsletter (http://hyg.ipm.illinois.edu) for updates.