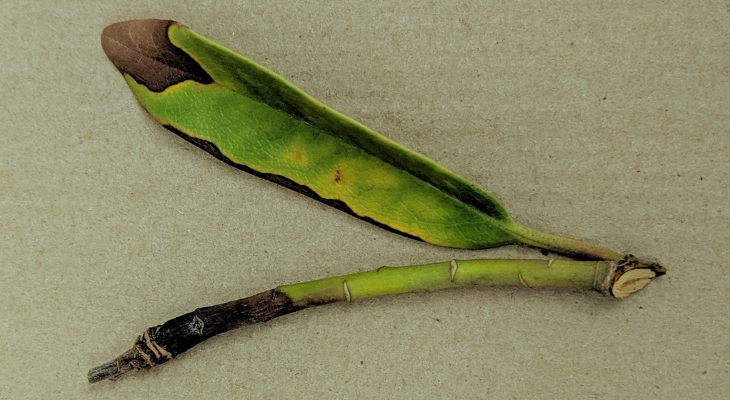 In early July, the Illinois Department of Agriculture submitted a press release detailing the detection of a new pathogen in Illinois that threatens our native oaks. This non-native pathogen is the causal agent for a very serious disease known as sudden oak death. However, there may be some good news in this incident, thanks to swift action by the agency and others to rapidly identify and quarantine infected nursery plants.

Sudden oak death has probably received the most attention due to its devastating impact to oak ecosystems in coastal California, where it was introduced from infected nursery stock in the mid-1990s. The pathogen has been identified in 15 counties in central and northern California, as well as a few in Oregon and Washington.

Outbreaks of P. ramorum infections in California were originally called “sudden oak death” due to the rapid death of leaves upon initial infection, often occurring in just a few weeks. However, infected trees typically take a few years to actually die. Following initial infection, oak species develop debilitating trunk cankers that weaken the plant significantly over time. In the meantime, a number of other secondary organisms further exacerbate the oak’s decline as they colonize the ailing tree. Ambrosia beetles, bark beetles and a decay fungus assist in the eventual death of the tree from a combination of insect and disease.

P. ramorum is a moisture-loving, fungus-like organism that produces plentiful spores in wet, humid conditions. The spores infect foliage of a number of woody species, globally more than 100 host species have been identified to date, causing leaf spots and shoot dieback but rarely death. However, the foliar hosts of this pathogen play an important role in its spread as they act as a source of inoculum that may be dispersed by wind, rain or human activity to other plants susceptible to trunk cankers.

In the California coastal oak ecosystem, the key player among foliar hosts is the California bay laurel (Umbellularia californica), which are broad-leaved evergreen trees that typically reach 40 to 80 feet at maturity. Although they are susceptible to infection from P. ramorum, it only impacts their leaves and does not lead to death. This disease is referred to as ramorum blight or ramorum dieback, although it’s caused by the same pathogen as sudden oak death, P. ramorum. As ramorum blight infects widespread stands of California bay laurel, the disease is also transmitted to oaks.

In Illinois, ramorum blight is the only disease associated with P. ramorum that has been detected, which is a really important point. To date, P. ramorum has not been identified on any oak species.

In May of this year, ramorum blight was identified on rhododendrons (another foliar host of P. ramorum) at a Walmart in Indiana, which were received from a nursery in Oklahoma. As records were traced to the original nurseries in Washington and British Columbia, officials learned that some plants had arrived at Walmart, Hy-Vee and Rural King locations in Illinois, as well as 18 other Midwestern states.

In late May, state and federal agriculture department field inspectors visited locations known to have received infected plants. The search was focused on rhododendrons, but inspectors also sampled other potential host plants such as azalea, viburnum and lilac. Symptomatic plants were quarantined and samples were tested at various laboratories, including the University of Illinois Extension Plant Clinic, Michigan State, Cornell, Kansas State and USDA.

Samples collected from around Illinois tested positive for P. ramorum on both rhododendron and lilac. Following these findings, infected or potentially infected plant material has been quarantined. Both Walmart and Rural King are participating in voluntary recalls of any possibly infected plants received from the source nursery.

Thanks to quick action by the state Department of Agriculture and others, potentially infected plant material has been removed from the market. To date, there are no known infected plants that have been planted in the landscape; all known infections are confined nursery stock at retail locations.

However, it is especially important that the general public remains aware of the potential that some of this plant material may have escaped quarantine. If you or anyone you know has planted a rhododendron or lilac in 2019, these plants need to be carefully monitored for symptoms. Typical symptoms of ramorum blight include brown discoloration along leaf margins and dark brown tip dieback on branches. Plants established before 2019 are not likely to have been infected by P. ramorum since there has not been a reported incident of escape into landscape.

Hopefully, P. ramorum can be confined to nursery stock if all of us take heed and keep watch for symptomatic, newly planted rhododendrons and lilacs. It is vitally important that this pathogen is not allowed to transfer to our native oaks.

If you suspect ramorum blight on rhododendron or lilac planted in 2019, a University of Illinois Extension Plant Clinic Alert with specific symptoms to watch for and appropriate contact information may be accessed here: https://go.illinois.edu/ramorum.

Originally published in the News Gazette on August 10, 2019.