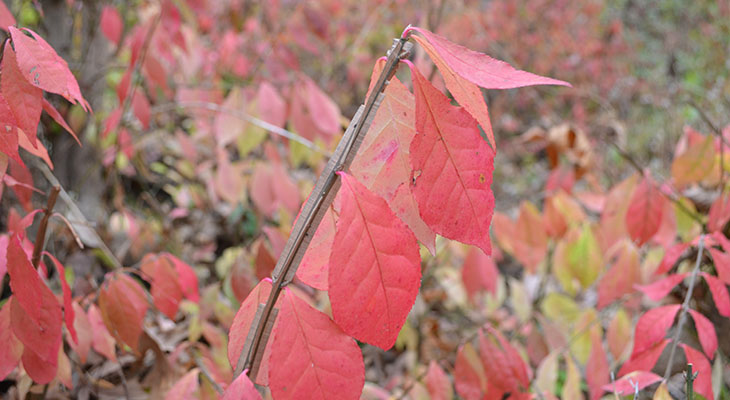 This past week, the vivid red leaves of our native maples have really stolen the show, reaching near peak fall color for the year.  I have always loved the brilliant red colors of autumn leaves, making burning bush (Euyonomous alata) an old favorite of mine. However, in recent decades this plant has emerged on invasive species lists from the East Coast to the Midwest, which has forced me to take it off my personal list of recommended landscape plants.

Prior to learning about its invasive status, burning bush was high on my list for good reason.  It’s an all-around tough plant, performing well in a variety of soil conditions, which makes it easy to establish with success.  In addition, it thrives in a wide range of sunlight from shady spots to full sun allowing it to easily fit into most landscapes.

Its landscape value certainly spans four seasons of beauty, creating ornamental interest throughout the year.  Winged twigs have two to four-sided corky ridges adding winter beauty in the absence of leaves.  Attractive, bright red berries mature in fall and often persist beyond leaf drop.  Although spring flowers are not particularly showy, the medium to dark green foliage emerges fairly early with an attractive color and texture to span the summer.  Its fall beauty is nearly unmatched, as it turns an intense bright red color that almost seems to glow.

From a management standpoint, I always admired its ‘prune-ability’.  It has an abundance of dormant buds that are just waiting to spring to life after pruning cuts add light to the inner canopy of the plant.  Although it can reach almost 20ft in height if unpruned, its ability to readily sprout from buds and fill in make it easily pruned into whatever shape fits the landscape best. From the less attractive shearing into a hedge to careful hand-pruning into a more natural look, it adapts well to nearly any pruning.  With such a forgiving growth habit, it’s one of those shrubs that is just a pleasure to hand-prune into almost any shape or size.  Next to arborvitae, it’s one of my favorite shrubs to prune.

Based on the long list of positive features, it was really hard to learn that burning bush was invasive. In fact, I was somewhat in denial until I experienced it first hand on the loose in a woodland, where it spreads aggressively from berries, taking over the understory and out competing native plants.

In the Midwest, it’s not quite as aggressive as bush honeysuckle (Lonicera maackii) making it somewhat easier to control, especially in the early stages of invasion.  I don’t believe it’s nearly as big of a threat as honeysuckle to native plants in Illinois, although it does seem to be quite underreported.  I have personally experienced invasive populations across both central and southern Illinois.  In recent years, it has really hit New England natural areas hard, prompting several states to ban the sale of Euonymus alatus or any cultivar.

On the bright side, there are number of great shrubs to plant as alternatives to burning bush.  Non-natives such as Virginia sweetspire (Itea virginica) or blueberries (Vaccinium corymbosum) can add a wonderful bright red fall color to the landscape.  Blueberries also add an edible crop of berries, although they do have specific, acidic soil requirements.  Virginia sweetspire is not picky, tolerating a wide range of soil conditions and offering a spectacular spring flowering display in addition to fall beauty.

Among our native shrubs, I recommend smooth sumac (Rhus glabra), black chokeberry (Aronia melanocarpa), eastern wahoo (Euonymus atropurpureus) or spicebush (Lindera benzoin) as replacements. Both sumac and chokeberry add a brilliant red fall color to full sun locations. Wahoo has an interesting red berry structure, beautiful red to pink fall color and a great tolerance for shade.  Whereas, spicebush does not have the wonderful red fall color (although it turns a handsome bright yellow), it tolerates heavy shade and thrives in a range of soil conditions.  In addition, it provides a showy, and fragrant, flower display in early spring prior to leaf out.

Looking back in my career, some of the most eye opening and shocking realizations have come after learning more about the invasive status of certain plants.  Whether it is an old favorite (like burning bush) or a plant I recognized from the field, but had not yet identified (such as Japanese stiltgrass), the reality of invasive species can certainly hit home hard.

It was truly heartbreaking to learn about burning bush’s invasive tendencies after many years of planting, pruning and maintaining the shrub in landscapes from cites to rural areas.  However, I’ve found solace in the many alternatives available to replace it.  I view it as an opportunity to plant new species and diversify my landscaping.