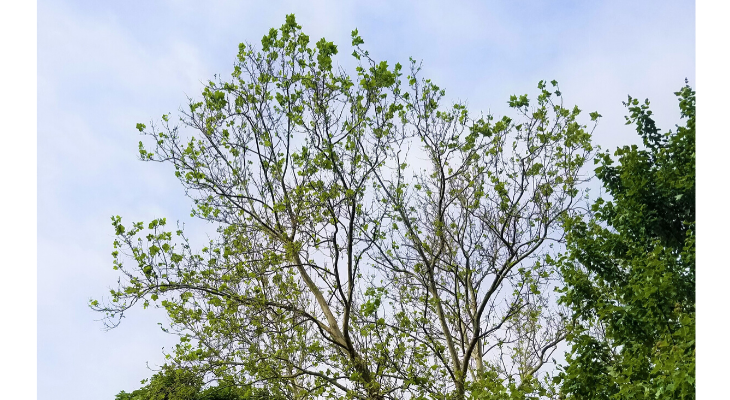 It has been another difficult spring for sycamore trees across central Illinois as near bare canopies of this tree stick out among the fully developed leaves of neighboring trees.  However, this doesn’t necessarily spell doom for your sickly looking sycamore.  It’s all caused by naturally occurring fungi that tends to ebb and flow with our spring weather over the years.

The American sycamore (Platanus occidentalis) is a native tree, present across all counties in Illinois.  In the average central Illinois river bottom environment, you won’t have to go far to find this tree.  It thrives on the deep fertile soils present in our bottomlands, occupying various locations in the floodplain from streambanks to occasionally flooded terraces and side slopes of the floodplain.  It is versatile enough to also occur in uplands and commonly invades abandoned fields with its light and fluffy, wind-dispersed seeds.

Sycamore adapts to a wide range of soils which makes it a hearty urban tree.  Although it does present somewhat of a maintenance issue in the form of dropped leaves and twigs, I have been impressed with its performance in urban environments.  It develops into a large, majestic shade tree with beautiful, creamy white inner bark that contrasts nicely with darker chunks of older, exfoliating bark over time to create a wonderful ornamental display of year-round interest.

Perhaps it’s one major downfall is susceptibility to a leaf and twig infecting fungus, referred to as anthracnose, which has plagued the species for the past few springs.  Cool and wet spring weather promote this pathogen by creating ideal conditions for it to thrive.

Anthracnose is a common name used to refer to a group of fungi that case damage to shade trees. It can infect a variety of tree species other than sycamore, making it one of the most widespread and unsightly diseases of shade trees in the Midwest.  Although it detracts from ornamental appeal, it rarely causes tree fatality and most species are able to coexist with the fungi.  However, dogwood (Cornus florida) is one major exception with anthracnose infection causing widespread death of this species across its native range.

Each spring, anthracnose spores infect newly forming sycamore leaves causing brown or black blotches along leaf veins.  In severe cases, such as this spring, the fungal infection is so extreme that young leaves die and fall off.

Anthracnose becomes especially severe on species with susceptible twigs, such as sycamore and dogwood.  Spores can infect new shoots and buds often killing them before leaves can even develop, creating the alarmingly bare tree canopies we can see now.

Spring weather is the primary driver of this pathogen each year.  The perfect conditions are created when temperatures are in the 50’s during initial leaf out and bud break with frequent rain and wind helping to disperse spores and increase infection rates.

The good news is that sycamores have coexisted with anthracnose for eons and typically recover with a canopy of full leaves by mid-summer.  Although trees lose significant energy in spring while attempting to leaf out, once the canopy finally emerges, the energy produced during the rest of the growing season can supplement the loss.  However, repeated years of severe infections can work to lower tree health over time.

While there is no practical treatment for anthracnose, we can do a lot to help out sycamores during the growing season.  Since leaf out typically isn’t completed until the very hot part of the year, anything that can be done to preserve moisture, such as mulching, is a huge help.  Watering during times of low rainfall can help maintain production and boost energy reserves for next year.

To lower infection rates, clean up and destroy dead leaves and twigs as they can be a source of reinfection next year.  Where possible, consider pruning out stem cankers as well to reduce spring spore production.

Although a large, bare sycamore is unsightly this time of year, have faith that your tree will recover and leaf out in the coming weeks as rainfall lessens and anthracnose infection rates dwindle.  In the meantime, enjoy the beautiful, contrasting bark that remains more visible in the absence of leaves with the hope that sycamores will fare well next spring and bark will be concealed by a thick canopy in June.