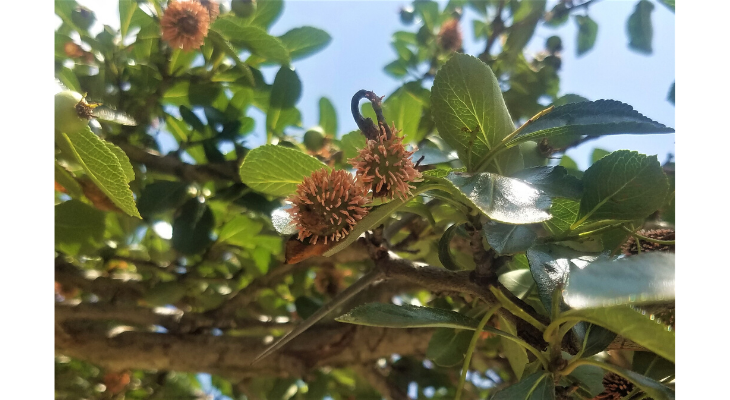 Whether its fungi, bacteria or even viruses, one of the most important aspects of plant disease management is stopping or limiting the spread of infectious pathogens.  I have always been fascinated by the way these tiny organisms, rarely visible to the naked eye, make their way through nature to infect new plants.  Many of their stories sound like something out of science fiction, often involving multiple species or special adaptations to enter and infect their host.

Fungi are perhaps the largest or most common group of organisms responsible for plant diseases we see in our yards and gardens.  In some cases, such as with the multitude of fungi that infect tomato plant leaves, fungi are present in the environment and the simple movement of wind and water will complete their path of spread.  That’s why it is critically important to remove and destroy infected tomato foliage.  And the same can be said for many fungal pathogens of tree leaves, as removing and destroying infected plant parts each year will reduce next year’s source of infection.

A number of fungal pathogens have the ability to infect plant parts other than leaves.  In trees, some of the deadliest infect and disable the tree’s water-conducting tissue, called the xylem.  Some of these tree pathogens, such as with verticillium wilt, are present in the soil, entering via root tissue.  However, most of these fungi need some kind of boost to spread across the landscape.

In the case of oak wilt, a very serious disease of our native oak trees, the primary ticket for spread to new areas comes from sap feeding insects.  After an infected oak tree dies, the fungal pathogen (Ceratocystis fagacearum) produces large spreading structures under the bark, referred to as fungal mats.  These mats push apart and loosen bark as they expand, producing a fruity odor that attracts sap feeding beetles which become covered in spores.  As the beetles move to other, uninfected trees and feed, the infectious spores are transported directly to a new host.

It is especially important to understand the spread of oak wilt because pruning cuts made in the summer can attract the same beetles that may carry infectious spores.  To avoid attracting beetles, pruning of any oak species should be limited to winter time when the beetles are dormant.

There are several cedar-rust diseases of trees that are caused by fungi with complex lifecycles that involve multiple host species.  While their spread is largely from simple means, such as wind and water, the fact their lifecycles involve two separate species of trees is amazing to contemplate.  Additionally, it is more amazing that they often have the ability to infect more than just leaves, typically attacking twigs and fruits as well.

Part of this pathogen’s lifecycle is spent on trees in the juniper family, most commonly eastern red cedar (Juniperus virginiana) in Illinois.  On junipers, galls develop on infected needles around mid-spring.  As they enlarge and are fueled spring rains, yellow or orange gelatinous tendrils emerge from the gall, like an alien life form.  They release abundant spores that are windblown to a second host species, infecting apples, crabapples, hawthorn and other members of the rose family.

Newly emerging leaves of apples and other hosts are infected in springtime, which in turn release spores in midsummer from weird looking, hair-like cylindrical structures on the underside of leaves.  The fungus can also infect twigs and fruit, with the infected fruit having the most alarming appearance as finger-like fungal tubes protrude to release spores.  Spores from these deciduous hosts will infect an evergreen host from the juniper family in late summer or fall, completing the cycle.

Separating host species, by not planting susceptible juniper and rose family species in proximity, is one of the most effective methods of control, although sometimes challenging as spores have been noted to travel up to miles on the wind.  However, most infections occur within several hundred feet and the disease cycle can be broken by planting resistant species or resistant varieties of susceptible hosts.

Beyond interesting life histories or alien plant parts, understanding disease spread is a key to providing good control with prevention always being the best medicine.