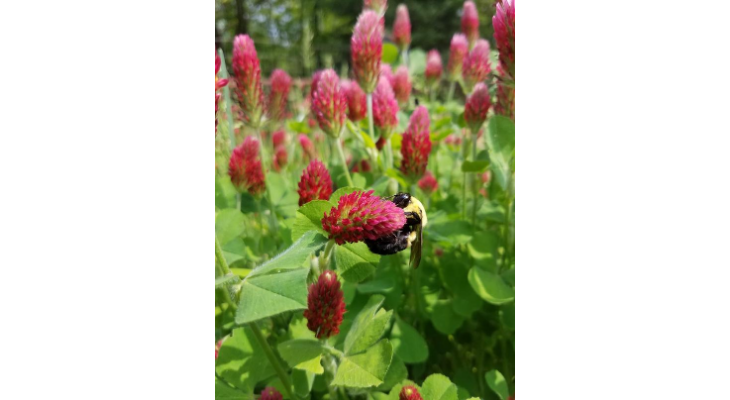 Cover cropping is a practice we often associated with larger scale farming, but they have the same great benefits in our home vegetable gardens.  A cover crop is a crop that is grown for protection and enrichment of the soil rather than for harvest.  Since they are not harvested for use as food, growers plant them for other valuable qualities they provide while in the ground.

Historically, cover crops were used by Native Americans and the Founding Fathers (George Washington and Thomas Jefferson were regular cover croppers).  They were used extensively in modern agriculture all the way up until the World War II era, when the advent of synthetic fertilizers virtually eliminated their use.

In recent years, this age old practice has seen a revival of sorts as farmers look for additional tools to improve the efficiency and sustainability of cropping systems.   Government agencies and industry alike have developed programs to promote cover crop use in the interest of soil conservation, which is becoming increasingly important as climate change increases annual rainfall amounts across the Midwest.

Above the ground, cover crops provide protection to the soil from pounding raindrops and howling winter winds.  Winter hardy varieties form a dense cover as spring progresses and block out weeds until they are mowed or tilled under prior to planting of spring crops.

Below ground is where these valuable plants provide the greatest benefit.  Some cover crops, such as clover and peas, are nitrogen fixers and will actually add this limiting plant nutrient to the soil.  Others, such as buckwheat, annual rye and winter wheat will scavenge nitrogen available in the winter soil (some of which would otherwise be lost to leaching) and bind it up within their plant parts.  Upon tillage in the spring, microbes in the soil will begin the decomposition process, unlocking nutrients for next year’s crops.

Many of these species have been noted for their soil structure building capabilities.  Extensive root systems on crops like sundangrass or winter rye, loosen soil and build structure all the way down to subsoil.  However, cover crops in the brassica family (including certain varieties of turnips and radish) are probably the most impressive.  Not only do these plants scavenge nitrogen, but the large roots physically reduce soil compaction as they develop and quickly decompose after being turned under, returning up to 200 lbs/ac of total nitrogen.

Cover crops may be planted as soon as vegetable crops are harvested, although most require planting 4-6 weeks prior to cold weather that will limit winter growth. So, right now is a great time for sowing seed.   The seeds are sometimes available at local garden centers or they may be purchased online from out of state sources.

You can prepare the planting area with tillage or use no-till methods.  Some of the larger-seeded varieties, such as wheat, oats and hairy vetch may be hand-seeded into closely set rows, while the smaller-seeded varieties, such as buckwheat, clover and ryegrass, may be broadcast on a prepared soil surface and covered with a thin layer of soil simply by raking them in.

Some varieties, such as the tillage radish, will succumb to freezing temperatures and die over the winter. Whereas, winter-hardy varieties will continue growth in the spring as things warm up.  Unless flowering is desired, mow the cover crop before it goes to seed.  About 4 weeks prior to planting new vegetable crops, till the cover crop under to allow soil fauna to begin the process of working their magic and return captured nutrients to the soil.

For me, cover crops have been a great way to end the gardening season and leave a cleanly planted bed for winter.  They have been a great addition to my crop rotation following early harvested crops like garlic or potatoes to build soil during the remaining growing season.  Furthermore, many species, such as crimson clover and buckwheat, have a beautiful flower display that will attract beneficial insects and pollinators alike, making these hardworking plants a great addition to any home garden.

If you are interested in learning more about individual cover crop characteristics and planting dates for our area, the Midwest Cover Crop Council has developed a wonderful selection tool, available at www.mccc.msu.edu.