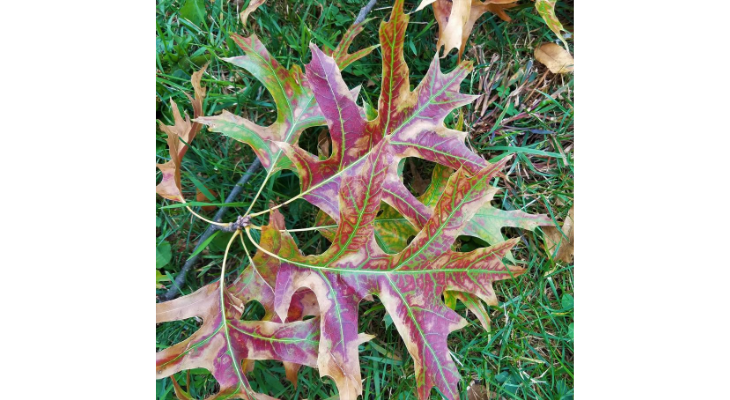 Shade trees are some of the most valuable plants in most urban landscapes.  They provide energy saving shade as well as valuable habitat for wildlife in a sometimes otherwise inhospitable built environments.  However, a mature shade tree takes considerable time to develop the canopy and branch structure that provides such benefit, which is the primary reason their high value when weighed against other landscape plants.  So, it pays to identify tree ailments effectively in the interest of protecting our investment in time and tree value.

Bacterial leaf scorch (BLS) is less well-known pathogen that infects a number of native tree species in our area, but is primary a problem for trees in the red oak subgenus, such as northern red oak (Quercus rubra), pin oak (Quercus palustris) and shingle oak (Quercus imbricaria).  The disease is caused by a bacterium, Xylella fastidiosa, which was first identified in the late 1800’s as a pathogen on grape vines and peach trees in the US.

Over the past 30 years, X. fastidiosa has been documented in over 40 species of landscape trees, with a much wider host range of over 150 plants across 30 families of both dicots and monocots in North and South America.  In 2013, the pathogen was first identified in Europe, associated with dying olive trees in southern Italy.

Globally, this pathogen has emerged as a serious threat to plant health for a range of agricultural crops and shade trees, hitting the grape and citrus industries in North and South America especially hard, but threatening agriculture and forestry worldwide.  Recent research predicts an ever expanding range for this pathogen as global warming increases.

X. fastidiosa has been shown to spread in several ways, including: insect transmission, root grafts and possibly pruning cuts with infected equipment.  However, insects of the Cicadellinae (leafhoppers) and Cercopidae (spittlebugs) family are the primary vector.  These insects spread infection as they feed on leaves.

Currently, there is no treatment for BLS and it has been shown to accelerate decline, contributing to the eventual death of infected trees.  Although BLS is not always lethal to shade trees, it certainly compromises aesthetic value and greatly reduces long-term vigor.

Symptoms of BLS include marginal leaf scorch, early defoliation, loss of vigor and dieback.  Given this wide range of symptoms, the disease is difficult to identify in the field and lab testing is often needed to fully confirm infection in shade trees.

However, there are some clues in the pattern of how this pathogen presents itself in shade trees.  Symptoms typically begin on a single limb or small section of the canopy and slowly spread over several seasons.  Leaves appear “scorched” meaning the leaf edges turn brown or yellow with dead tissue as if scorched by heat in midsummer, intensifying with the heat of late summer.

Scorch-type symptoms can also be a result of environmental stress, but these symptoms first appear on the newest leaves and branch tips, whereas BLS symptoms begin on older leaves first, often more toward the interior of the canopy.  Environmental stress produces scorched leaves in a more consistent, extensive pattern across the canopy, while BLS begins in more isolated location and spreads over time.

With BLS, scorched areas on individual leaves often have a colorful border of yellow or red, with green tissue along the leaf veins, which is sometimes a more distinctive symptom than the brown leaf margins caused by environmental stress.

If you have a shade tree in the red oak subgenus that is showing similar symptoms right now, and especially if the tree starts to drop leaves early, it may be BLS.  While there is no cure for BLS, positive identification of the pathogen is important for assessing treatment.  Environmental stress can often be relieved with watering, mulching and perhaps some practices to improve or relieve soil compaction.  Currently, the same treatments would be recommended for BLS infected trees, but homeowners need to understand that treatment may slow disease progression, but does little to reverse the effects.