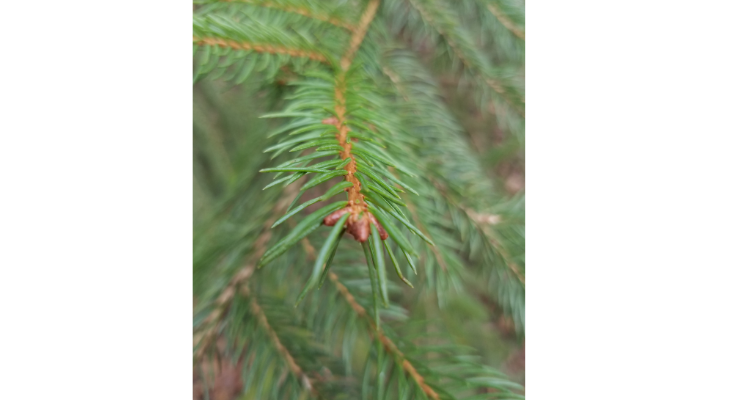 Woody plants are some of the largest and most long-lived plants in the landscape, forming the majestic and expansive canopy of our urban and natural forests.  With all of this wonderful woody growth, have you ever stopped to think about why woody plants attain greater height than their smaller, herbaceous cousins?  What mechanisms are at play in woody plant growth compared to other plants?  How do cultural practices like pruning or impacts like storm damage effect the growth of these plants?

Apical dominance is a term used to describe a major factor at play in woody plant growth.  It refers to fact that the apical bud, or the bud at the apex (or tip) of the stem, inhibits the growth of other buds that are lower on the stem.  Essentially, the bud that is highest on the stem will grow, while the growth of lower buds is limited to focus the plants energy on the growing tips.

Apical dominance is controlled by the release of a plant hormone called auxin from the bud that is highest on the stem.  As this hormone travels back down the stem and other, lower buds are exposed to auxin, their growth is inhibited.  In this manner, woody plants can grow taller, rather than bushier, and capture more sunlight than shorter, adjacent plants.  Essentially, trees are programmed to grow tall by the pattern to which their buds are exposed to auxin.

Since woody plants invest so much energy in their growing tips, when the apical bud is removed, either from a pruning cut, a browsing deer, storm damage, or other impacts, it becomes a race to reestablish the dominant bud.  In absence of auxin, which would typically be released by the apical bud, the growth of lower buds begins, which takes significant energy.

Until a new bud becomes dominant, or higher on the plant, a lot of energy is invested in a flush of growth to reestablish an apically dominant bud.  For this reason, it can be incredibly important to establish one dominant stem, called the central leader, in young trees.

If a young tree has two competing stems at the top that are nearly the same height, significant energy is expended as they compete to grow the tallest.  A few simple pruning cuts to remove competing stems early in a tree’s life can establish a dominant central leader and direct growth and energy upward, resulting in a taller shade tree sooner.

In cases where the apical bud or buds in a woody plant are indiscriminately removed, such as with deer browse, it can cause serious problems for the plant as it scrambles to reallocate energy and growth.  In nature, it is a huge advantage to grow above the height of browsing animals.  So, a plant that gets taller quicker, not only outcompetes neighboring plants, but also grows beyond the reach of browsing herbivores.

Apical dominance varies by age in some species, such as cottonwood, sweetgum and many oaks.  In these cases, apical dominance weakens as the tree gets older.  This adaptation serves to speed growth above the height of browsing animals by focusing more growth upward in younger plants. As the plant ages and apical dominance weakens, it expends more energy spreading out, as opposed to growing upward, which allows it to capture more sunlight with a wider canopy.

This winter, as you consider pruning woody plants in your landscape, think about the carefully ordered hierarchy of buds.  Pruning is essentially a human interaction in the overall apical dominance of the plant’s structure and there are certainly ways we can both help and hurt trees or shrubs with our pruning cuts.