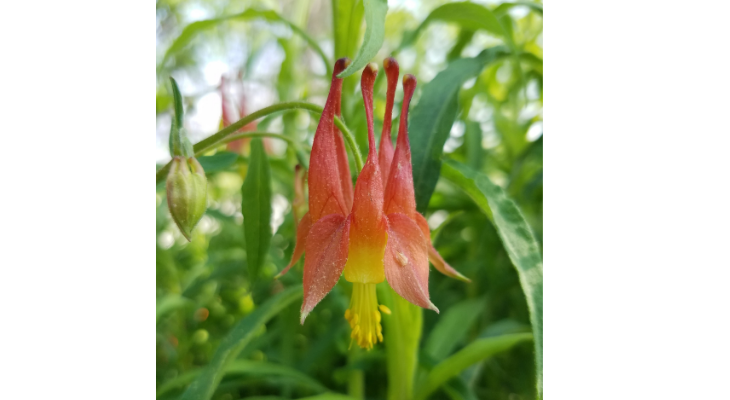 This past Saturday, we celebrated 15 new graduates of our Master Naturalist Training. The graduation day festivities included group presentations to showcase outreach projects they worked together to develop over the past few months. There were some very well-developed projects presented, and all did a great job of relating science and nature to their target audience. I thoroughly enjoyed the presentations and look forward to seeing these outreach activities put into action by Master Naturalists as they continue to provide outreach and education in our local communities.

One group presented an interesting version of the card game “Old Maid” where participants matched cards with plant information to cards that had associated pollinating insects. This particular game struck home with me as I noticed one of the matching pairs included wild columbine (Aquilegia canadensis) and a native pollinator it supports, the columbine duskywing (Erynnis lucillius). The caterpillar of this species feeds exclusively on columbine leaves.

What bug is on my wild columbine?

Earlier that week I had been admiring a now thriving patch of columbine that we planted in our front yard pollinator garden a few years ago. Learning more about this species-specific relationship made me curious enough to inspect my columbine upon returning home that day. Low and behold, my columbine had been fed upon and I could easily identify some bright green caterpillars all over the lower leaves of almost all the plants in our patch.

Although the amount of feeding was a bit disturbing - the plants were nearly defoliated in the bottom third - I excitedly cracked open the ID books to see what columbine duskywing caterpillars looked like.

A little further investigation revealed that columbine duskywing is rare in Illinois and a variety of resources list Illinois as a potential part of their home range, but not confirmed. So, as the excitement faded to worry, I began to research other types of insect feeders on columbine. This research led me to a ton of information about a non-native pest, the columbine sawfly (Pristiphora rufipes).

I quickly began to correlate the feeding pattern, appearance of the larvae, and other information to determine that my presumed “caterpillars,” which are larvae of moths and butterflies, are not in fact caterpillars at all. They’re the larval form of columbine sawfly, and they were devouring my plants!

Pest not pollinator - what now?

Columbine sawfly is yet another non-native, they're from Europe, and invasive species that was brought to the US inadvertently. Since its discovery in Canada back in 1963, it has spread southward across much of wild columbine’s range in the U.S. In general, this sawfly is drawn to some of the hybrid columbines (Aquilegia x hybrida) and are far less common on native species.

Despite the voracious appetite of these sawfly larvae, columbine plants in good health typically recover from this damage with a second flush of vegetation in the coming weeks. It is largely viewed as cosmetic, but I did go ahead and pick off all the caterpillars I could find.

I plan to watch these plants for more sawfly larvae and handpick them if they pop up in the next week or so, but I’m not too worried if I miss a few. Hopefully, all the birds that have young to feed this time of year will pick up any stragglers.

Regardless of my initial excitement in possibly finding a native pollinator, I am happy to learn that this pest may not be too big of a deal. However, May is Invasive Species Month in Illinois. If you are interested in learning more about invasives that do really threaten our native plant populations, Illinois Extension has released a variety of resources across our websites and social media platforms. Please tune in to learn more about which plants and animals may be threatening biodiversity in Illinois.