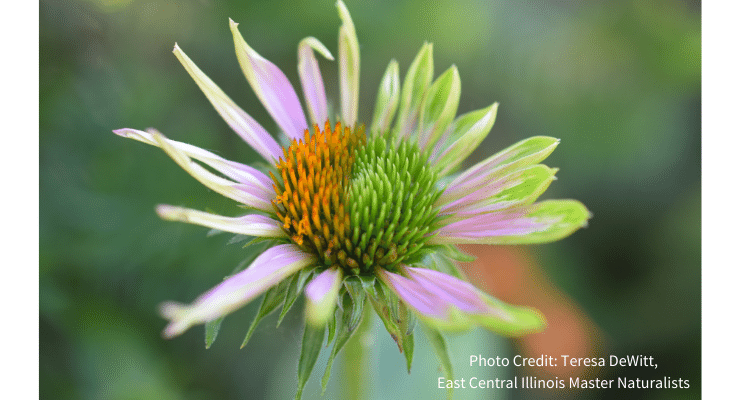 It is always interesting to observe plant diseases and try to unravel the mystery of how a particular plant became infected and to look toward solutions.  So many of these ailments have an incredibly fascinating path to infection, often including multiple species when you consider the pathogen, host and potential vector species.

Aster yellows is a somewhat uncommon disease in Illinois with several species involved in transmission to a wide range of host plants including quite a few vegetable crops, as well as a large swath of ornamental plants.  As its name implies, it infects a number of species in the large and diverse Aster Family (Asteraceae), as well as some grasses and grains and even some common weed species.  All in all, this pathogen infects over 300 species across 38 families.  In central Illinois, I’ve primary seen reports of this diseases on black-eyed susan (Rudbeckia hirta) and coneflowers (Echinacea spp.).

The Insect and the Disease

Tiny insects that suck the sap of plants spread this pathogen as they feed, with the aster leafhopper (Macrosteles quadrilineatus) being one of the most common vectors.  This leafhopper is one of many insects that overwinter in southern states of the Gulf region and annually migrate up to the Midwest for the growing season.  .

The pathogen responsible for this disease is a specialized bacterium called a phytoplasma.  As leafhoppers, go from plant to plant piercing leaf tissue to access their food source, they become “infected” by the phytoplasma from plants that already have aster yellows.  In a matter of a few weeks, the phytoplasma multiplies to infest salivary glands of the insect.   As infected insects go about their business of feeding, they infect each new plant encountered and continue to be infectious for the remainder of their 30-90 day lifetime.

Symptoms of this disease are most noticeable as flowers develop, causing flower heads to be deformed or tufted.  Portions of flowers stay green, not developing their typical color and many flowers become lopsided or remain small and disproportionately sized.  In some cases, multiple deformed flowers develop or odd-shaped leaves can spring out of the side of flower structures.

While symptoms in blooms of infected plants are most notable, they can sometimes mirror the impacts of feeding by other insect pests, requiring assessment of the whole plant for true diagnosis of this disease.

Chloris, or yellowing of the tissue between leaf veins, is probably the most diagnostic symptom.  Foliage or flower petals may also show mottling that looks like yellow specs or blotches that develop as tissue becomes infected from insect feeding.  Plant growth is usually stunted or irregular, with smaller and narrower leaves or often discolored leaves when compared to healthy plants.

In coneflowers the primary look-alike ailment is caused by feeding from a species of eriophyid mite. This mite is not yet been fully described taxonomically and therefore has no common or scientific name.  It is typically referred to as the “coneflower rosette mite” due to the rosette-causing damage it inflects.

The difference in symptoms between coneflower rosette mite and aster yellows lies in the pattern across the plant.  Aster yellows produce symptoms throughout the plant, on foliage as well as flowers.  Whereas mite damage is confined to flower structures.  Both conditions require control to limit spread.

Unfortunately, there is no treatment for aster yellows and care must be taken to limit its spread in the landscape. If you identify infected plants, they need to be completely removed from the landscape, roots and all, since they serve as a constant reservoir for the pathogen.

To limit spread from leaf feeding insect vectors, consider floating row cover or other methods of exclusion to protect susceptible species. Selective spraying with insecticidal soap is another option but take care to limit your application and avoid death of non-target insect species. As mentioned earlier, rudbeckia and echinacea species are susceptible, along with quite a few other common ornamentals such as zinnia, marigold, petunia and chrysanthemums.