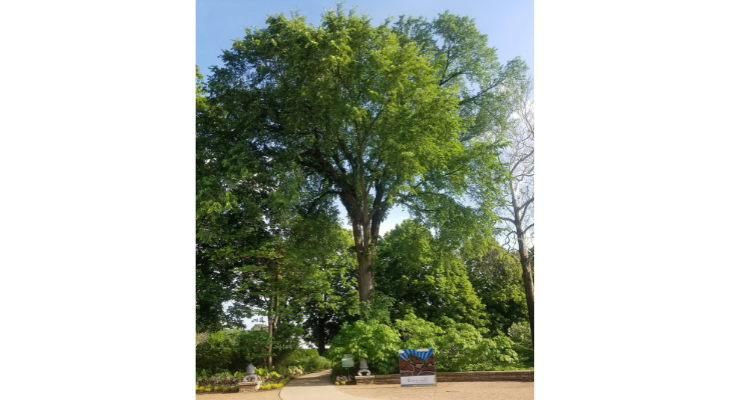 Over this past week, the fall weather has brought bare branches to the previously color-filled canopies of so many trees in the landscape.  As the autumn leaf drop has progressed, there are several elm trees that I pass each day which have held onto their fall color and really look spectacular as they grasp their foliage late into the season.

Frontier elm (Ulmus ‘Frontier’) is one of many elm cultivars and hybrids that were developed in response to the virtual elimination of the American elm (Ulmus americana) by Dutch elm disease (DED).  ‘Frontier’ has proven to host one of the more spectacular foliar displays among its cohort of hybrids.  The ornamental appeal begins early in spring as leaves emerge with a reddish tint that transitions to lustrous, dark green for the growing season.  Fall color is spectacular, ranging from a bright red to a deep purple that remains a beacon of color late into the fall season, with leaves hanging on longer than many other deciduous species.

The impetus for development of hybrid elms began as early as the 1930’s, as the US watched DED eliminate the American elm from urban areas and forests. The fungal pathogen (Ophiostoma ulmi), spread by elm bark beetles, had already infected elm trees in Europe after its introduction from Asia in the 1920’s.   Asian elms developed resistance to the DED fungus over millions of years, while European and American elms had little resistance having not been exposed to this exotic fungus until its sudden human caused appearance.

Elm bark beetles from Europe harboring the pathogen where inadvertently introduced to the US elm population in the early 1930’s.  By the 1970’s DED has swept across the vast native range of American elm, eliminating nearly all of its kind.  Today, younger American elms can be found in the landscape as they seem to have some resistance early in life but mature elms are quite rare.

The loss of the American elm had a huge impact on the field of arboriculture in variety of ways.  Since American elm was the dominant tree in many urban forests, the removal of this single species nearly eliminated tree cover in many communities.  As a result, arborists today intentionally plant a greater diversity of trees to create more resilient urban forests.

The lack of available treatments for DED has led to many innovations in tree health care in the decades since, along with a greater demand for these services.  Given the wide-spread impact of this non-native pathogen, it serves as valuable lesson on invasive species, which has changed public awareness and guided policy.

Scientists and plant breeders have searched for an American elm replacement since we first started to lose this valuable urban tree.  Many view it as the nearly “perfect” urban tree.  Its vase shaped and arching growth habit created a cathedral-like canopy over city streets and provided shade for homes, parks and other areas of human habitation.  In nature, American elm is adapted to wide range of conditions making it equally adaptable to urban environments.  With this adaptability and relatively quick growth, it made for a fast-growing and long-lived shade tree that was extensively planted in the early 20th century.

In the quest for a replacement, breeders have attempted various hybrids between Asian, American and European elm species.  Many of these hybrid selections have created unique combinations.  Most are virtually DED free with the inclusion of Asian genetics for natural resistance, but few offer the same tall, vase-shaped habit and adaptability as our native species.

Introduced in 1990, ‘Frontier’ elm is a hybrid between a European elm (U. minor) and an Asian elm (U. parvifolia), representing the first commercially available hybrid of a spring-flowering European elm crossed with a fall-flowering Asian elm.  The resulting plant rarely flowers or produces seed, although I have observed fall flowers on certain individuals.  It does have the characteristic vase-shaped habitat and is quite fast growing, but matures to much shorter stature, topping out around 30 or 40ft.  Its proven to handle urban conditions well and does make an excellent medium-sized street tree with remarkable fall color.

Breeders have also looked for naturally DED-resistant American elms to attempt to isolate and duplicate that resistance in various cultivars.  To date few have proven to provide total resistance, although some such as ‘Princeton’, ‘New Harmony’, ‘Prairie Expedition’ and ‘Valley Forge’ all perform well and provide the closest urban replacement for American elm, but none have been competitive enough in nature to restore the species across its natural range.

So, if you are one of the lucky and rare few who know of a surviving American elm, be sure to protect and cherish it.  Who knows?  It could harbor the key genetics that our native species needs to make a comeback in the wild.