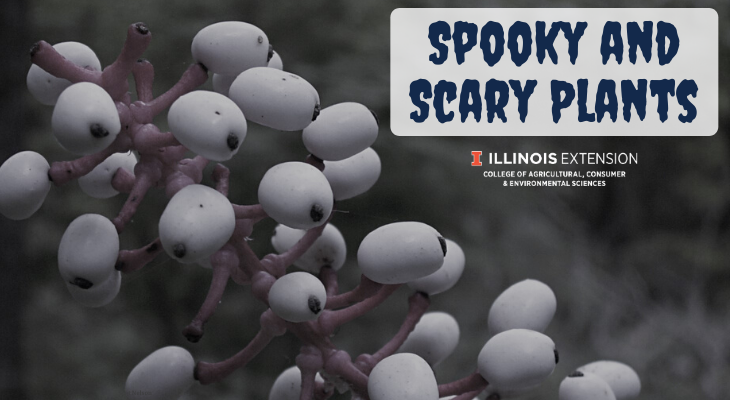 Halloween is a time of trick-or-treating, witches, ghouls, and ghosts. When it comes to plants, we typically think of pumpkins. Carnivorous plants may also come to mind, what could be scarier than a plant turning the tables and eating insects? There are plenty of other ‘spooky and scary’ plants out there to help get you in the mood.

Ghost plant (Monotropa uniflora), also known as Indian pipe and corpse plant, gets its name due to its ghostly white color. These plants are white because they don’t contain any chlorophyll, which is the green pigment that gives most plants their color. Chlorophyll is also responsible for harnessing energy from the sun so that plants can produce food (via photosynthesis). So how do these plants get food then? They steal it from trees via mycorrhizal fungi. Since they don’t need light to grow, they are typically found in forested areas that contain lots of organic matter. While they’re native throughout much of the United States and Canada, they aren’t commonly encountered. 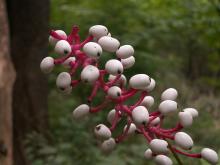 Doll’s eyes (Actaea pachypoda) get their names from their fruit. The berries, which are produced during the summer and fall, are white with a dark “pupil” at the end, which resembles a doll’s eye. These plants are native to the eastern U.S. and grow best in moist, well-drained soils that are high in organic matter in full to part shade. Just imagine walking through the woods with hundreds of little eyes watching you….creepy! It’s also important to note that all parts of this plant are poisonous.

Devil’s claw (Proboscidea louisianica) is a North American native with a scary name. They also get their name from their fruit. As the fruit begins to dry, it will split open and form two large hooks. As animals pass by the plants, the hooks will ‘grab’ on the passerby, allowing for the seeds to be dispersed. The fruit of Devil’s claw is edible while they are young and green (sometimes called unicorn plant) and are grown like okra. The plant is also commonly grown as an ornamental garden novelty. The plants can be rather weedy and invasive, though. 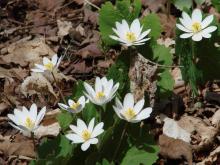 Bloodroot (Sanguinaria canadensis) is a spring ephemeral that grows throughout eastern North America in deciduous woods. All parts of the plant, especially the rhizome, will exude reddish sap when cut, hence its name. They grow in clumps and produce white flowers that open in early spring. Individual flowers will last for one to two days, and the blooming period lasts about two weeks. They can be important floral resources for pollinators in spring due to their early bloom time.

These are just a few examples of plants that have Halloween themed names. All of these plants can be grown in Illinois, so if you’re a big fan of Halloween, you can start making plans for your Halloween themed garden.

Good Growing fact of the week: One of the scariest plants out there is the manchineel tree (Hippomane mancinella). All parts of this tree are poisonous. According to the University of Florida, symptoms include blistering of the skin, conjunctivitis with blindness for up to 3 days, and severe gastrointestinal symptoms if ingested. Burning the wood can also injure the eyes. Even standing underneath a tree during rain can cause blistering of the skin due to the sap!