Winter Dormancy in the Landscape 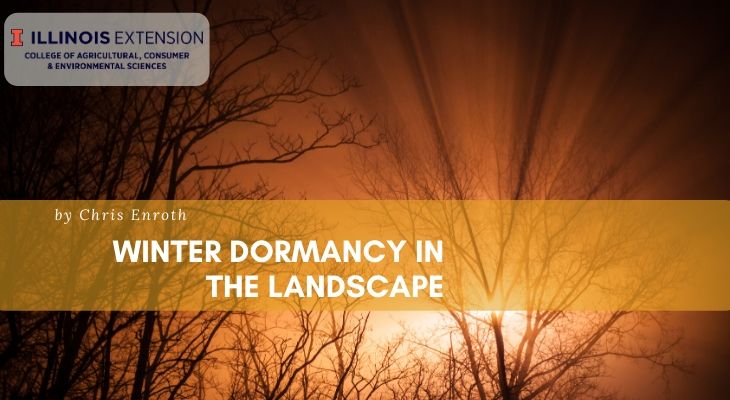 By mid-November, the last of the leaves float down to the ground and the landscape appears stark. All is quiet and nothing is growing as our gardens have been put to bed. Or are they? As I walk outside in the frigid cold, it is obvious my body has yet to adapt to colder temperatures, yet the turf stands green and crisp on a frosty morning. Evergreens brighten up a barren image of my yard. Even cool-season veggies are turning their nose up at the fall weather, rewarding me with a sweeter flavor than those same crops grown in spring.

By this time, our cool-season lawn grasses and evergreens have gone through a pre-dormancy period to harden them off to freezing temperatures.  And though their growth is nearly non-existent, on a warm sunny winter day, all things green are open for photosynthesis as opposed to the deciduous trees and shrubs that have closed shop for the season. And this is the trade-off between evergreen and deciduous – stay green and power through or go dormant until next spring. On both sides of the coin, evergreen and deciduous plants have had millions of years to adapt to our wintery weather, developing creative survival strategies. The rugged and evergreen rhododendron leaf has developed a waxy coating that protects from freezing temperatures and reduces water lost to winter weather. Needled evergreens have minimized their leaf surface area curtailing water loss during sunny and windy winter days.

There are actually two types of dormancy, termed eco- and endo-dormancy. Eco-dormancy concerns those surrounding environmental conditions that send a plant into its resting state. Once conditions become favorable again, (i.e. warmer temperatures) the plant resumes growth. Perennials often exhibit eco-dormancy. Endo-dormancy, common with woody trees and shrubs, is a much more complicated process as it deals with physiological changes within the plant. What triggers these internal changes? Researchers believe photoperiod, or day length, is the cause that sends plants into endo-dormancy.

Drought also plays a factor during the winter months, which is not necessarily dormancy but it does result in reduced plant growth. Scientists have tied winter drought conditions to the discovery of increased abscisic acid (ABA) in dormant plant tissue. ABA’s main function is to slow the growth in plants and inhibit seed germination. It is essentially an anti-growth hormone. At any time of year, increased levels of ABA in trees signal the onset of drought. Drought is most common of frozen soil during the coldest parts of winter.

Even at this juncture, there are still some unknowns surrounding dormancy. We can at least say that plants have two methods for dormancy: stay evergreen and endure to spring or shed their leaves until the weather improves. Which one is better? It really depends on the winter. Stay warm!

Good Growing Tip of Week: While we may perceive plants as struggling to survive in the winter, the truth is most are perfectly adapted to tolerate our Midwestern climate. However, newly planted trees and shrubs may not be established and benefit from a 2- to 4-inch layer of mulch on the root system of the tree, never touching the trunk.