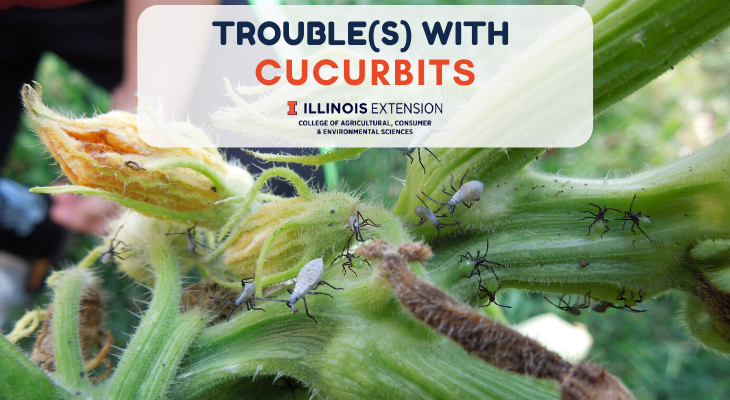 Cucumbers, melons, squash, and pumpkins are collectively known as cucurbits. Because these crops are related, they are afflicted with many of the same pests and diseases. Here are some of the most commonly encountered pests and diseases in cucurbits.
Insects

Cucumber beetles will attack cucumbers, squash, and melons. In Illinois, we have two species - striped and spotted. The adults of both species are around ¼" long with yellow to yellow-green wings and will have three black stripes (striped) or 12 black spots (spotted). As larvae, they eat roots and burrow into the stems of young plants. Adults will feed on seedlings as well as on stems, leaves, flowers, and fruit. In addition to their feeding damage, cucumber beetles also transmit bacterial wilt.

Plants can be covered with floating row covers to keep beetles off of them. Once plants begin to bloom the covers will need to be removed so pollinators can access the flowers. Insecticides can also be used. If applying to blooming plants, apply late in the day to reduce the chances of affecting pollinators.

Squash Bugs feed primarily on squash and pumpkins but may also feed on other cucurbit crops. Adults are brownish-black and about 5/8" long. Adults will emerge from overwintering areas in spring and will begin to feed and lay eggs. Eggs are copper-colored and laid in clusters on the undersides of leaves stems, commonly where two veins meet to form a V, or on stems. Newly hatched nymphs will have black heads and legs with light green bodies which will darken as they age. Both adults and nymphs use their straw-like mouthparts to suck out sap from leaves, stems, and fruits of plants. Feeding can cause yellow spots to appear on plants, which will eventually turn brown. Feeding by large numbers of bugs can cause vines to die.

Handpicking and destroying egg masses is a good way to reduce initial populations. Boards, pieces of newspaper, or cardboard can be placed in your plantings. The bugs will congregate under them at night. Then, come morning, you can come out and dispatch them however you see fit. Insecticides can also be used to manage populations of squash bugs. Chemicals are most effective on young nymphs. The older and larger they get, the less effective they are. If you have issues with squash bugs, remove as much plant debris as possible in the fall to reduce the bug's overwintering areas.

Squash Vine Borer will feed on both summer and winter squash as well as pumpkins. The adults are a colorful, clearwing moth that are 5/8" long. They will emerge in late June and early July and lay eggs, primarily near the base of stems. When the eggs hatch, the larvae (caterpillars) will bore into the stems and begin to feed, causing the vines to wilt and eventually die beyond that point. The larvae will grow to be about 1" and will have a whitish body and brown head. After feeding for 4-6 weeks, they will emerge and pupate in the ground.

Covering plants with floating row covers can also help keep squash vine borers out of them. Altering your planting date or planting a second crop in early July to avoid peak egg laying. If you decide to apply pesticides, apply them to the plants' crowns and runners when they begin to run. Again, applying late in the day. As larva feed they will push frass out of the vines. If you notice this, you can attempt 'surgery' on your plants and remove them. You may not always be able to save your plant, but if you do, you'll have an impressive story to share with family and friends.

Whiteflies can be managed by spraying them with a strong stream of water to knock them off plants. Yellow sticky traps can also be placed near plants to trap the adults. They are commonly attacked by other insects, so steps should be taken to conserve natural enemies. If populations get high, pesticides can be applied.

Bacterial wilt can be a serious problem in cucumbers and muskmelons (cantaloupe) and, to a lesser extent, squash and pumpkin. Leaves of infected plants will have a dull green appearance and wilt during the day. Eventually, the leaves will turn yellow and die. The wilting will spread throughout the vines and plant, eventually leading to death. To determine if the wilting you are seeing is caused by bacterial wilt or something else cut a vine near the crown and press the ends together. If bacterial wilt is the cause, you will be able to see strands of bacterial ooze as you slowly pull them apart.

Once plants are infected with bacterial wilt, there is nothing that can be done, and the plants should be removed from your garden to prevent the spread to other plants. This bacteria is spread by cucumber beetles. The beetles carry the bacteria on their mouthparts. When they feed on plants, the bacteria can enter the plants. Therefore, managing cucumber beetles is the best way to prevent bacterial wilt.

Powdery mildew is a common disease in cucurbit crops. Powdery mildew infections typically begin on older and shaded leaves as pale-yellow leaf spots. The spots will become white and powdery and grow into large blotches. Eventually, entire leaves, petioles, and stems can be covered. If powdery mildew becomes severe, plants can be weakened, and their fruit may ripen prematurely.

Powdery mildew does best in humid conditions and is more prevalent in shaded areas than areas exposed to direct sun. Therefore, make sure you are planting your cucurbits in sunny areas. Also, make sure you are properly spacing your plants to avoid crowding and promote good air circulation. Growing plants on trellises can also help provide air circulation. Depending on the type of cucurbit you are growing, there may be varieties that are resistant to powdery mildew available. Fungicides can also be used on plants at the first sign of disease.

Choanephora rot is a disease you may occasionally encounter during wet conditions, especially summer squash. The blossom end of infected fruit will be soft, rotted, and covered with white fungal growth that turns purplish-black (as it begins to produce spores). Fortunately, this disease is usually short-lived and will start to go away when conditions dry.

To try and avoid Choanephora rot, make sure you proved plant with proper spacing, this will allow the flowers and fruit to dry out quickly. Try to avoid letting fruit be in contact with moist soil by using mulch or raising them off of the ground. Finally, avoid overhead irrigation, as this creates the wet conditions this disease favors.

One issue home gardeners may encounter are plants that don't produce fruit, even when flowers are present. One explanation for this is that cucurbits have male and female flowers. The first flowers plants produce are commonly male flowers, which won't produce fruit (just pollen). To tell if a flower is male or female, look at the base of the flower. Female flowers will have a swelling at the base (that looks like a miniature version of the fruit) while the male flowers will not. Another possible reason could be a lack of pollination. This could be caused by poor weather conditions (rain, cold weather), causing pollinators not to fly. Or by the improper use of pesticides killing pollinators.

A common issue with cucumbers is misshapen fruit. There can be several causes for this, one being poor pollination. When the ovules (they become the seeds) are fertilized, this will cause the ovary (the fruit) to enlarge. If enough of the ovules aren't pollinated, the fruit won't properly develop, leading to misshapen fruit. Another possibility is low fertility. Side dressing plants with a complete fertilizer may help. Lack of water can also cause misshapen fruit. If there is not enough water or it is not uniformly available while fruit are developing, especially during hot weather, the fruit may not develop properly.

If you encounter any of these or any other issues with your cucurbits, feel free to contact your local extension office for help.