Kissing under the mistletoe – A holiday favorite with a dark side 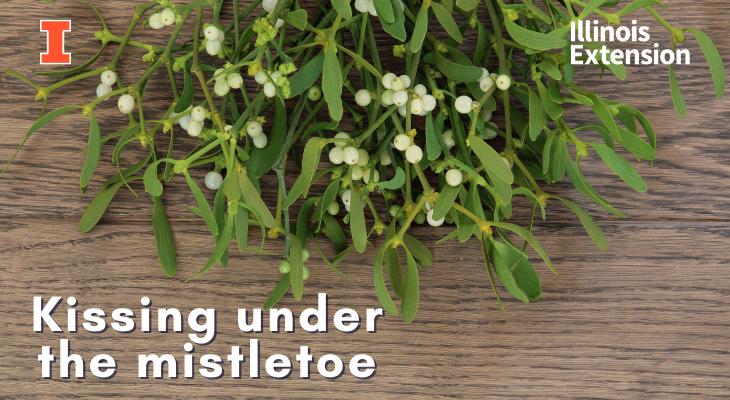 From evergreens and Poinsettias to holiday cacti and holly, we use a variety of different plants to adorn our homes and offices during the holidays. One plant we commonly hear about is mistletoe. Mistletoe has an interesting past, from an ancient symbol of fertility to somewhere to sneak a quick kiss. It also has a darker side as a freeloading parasite on trees.

It is believed that the golden bough that allowed the Greek hero Aeneas to travel to the underworld was mistletoe.

Mistletoe played a central role in the Celtic ritual of oak and mistletoe. During this ritual, druids (Celtic priests) would climb a sacred oak tree and remove the mistletoe with a golden sickle. After obtaining the mistletoe, they would sacrifice two white bulls to their gods. They would then make an elixir with the mistletoe and believed it would cure infertility as well as act as an antidote to all poisons.

Other cultures also associated mistletoe with fertility because it bears fruit in the winter. In Austria, mistletoe was placed in couple’s beds to encourage conception. In Japan, the Ainu would chop up mistletoe and put it on their fields to ensure a good crop. Welsh farmers believed that a healthy crop of mistletoe would mean they would have a good crop next year.

Why do we kiss under mistletoe?

No one knows for sure why we kiss under the mistletoe. One possibility comes from Norse mythology. The god, Baldur, was killed by an arrow or spear made of mistletoe. In some versions of the story, he is resurrected, and Frigg, the goddess of love and his mother, said she would kiss any who passed beneath it to show it was a symbol of love, not hate. Although, there is some debate as to if Norse peoples believed this or if this is a more modern, romanticized version.

“The mistletoe is still hung up in farm-houses and kitchens at Christmas, and the young men have the privilege of kissing the girls under it, plucking each time a berry from the bush. When the berries are all plucked the privilege ceases.”

Mistletoes are hemiparasitic plants, which are commonly evergreen. They will obtain water, nutrients, and minerals from their host plants. They are considered hemiparasitic because they can produce their own ‘food’ via photosynthesis during at least some point in their lifetime.

Birds commonly spread mistletoe. Birds will eat the plants’ berries and they will eventually pass through the bird. The seeds are sticky, thanks to a coating of viscin (speaking from personal experience, they are rather difficult to remove from cars once they dry…). If the seeds land on a tree, the seed will germinate and penetrate its host. It will then produce a special structure called a haustorium, which will act like a root, allowing the plant to begin its life of thievery.

Mistletoe isn’t all bad, though. They can act as a food source for birds, insects, and mammals. Additionally, they can be a source of shelter or as a nesting spot for birds.

The term mistletoe originally referred to Viscum album, which is native to Europe and Asia. Over time the mistletoe name has expanded to include parasitic plants in the order Santalales (over 1400 species), including those found in North America.

In the United States, the mistletoe species that people are probably most familiar with, and the type we decorate with, is American/eastern/oak mistletoe (Phoradendron leucarpum). It is an evergreen plant that looks similar to European mistletoe (Viscum album) but has shorter and broader leaves and larger clusters of berries (10+ vs 2-6). It can be found from New Jersey to Florida and west through Texas, including in Illinois, where it can be found in the southern one-sixth of the state. It can be found on over 60 species of trees, including maple, ash, walnut, oak, elm, willow, and oak.

There is a common belief that mistletoe is poisonous, even deadly. This is certainly true for European mistletoe. It appears that American mistletoe is less toxic than its European cousin. One analysis of exposures concluded that one to three mistletoe berries or one or two leaves are unlikely to produce serious toxicity. Another study found that 99.2% of those exposed to mistletoe had no poisoning symptoms, and there were no fatalities. And that the accidental ingestion of American mistletoe is not associated with profound toxicity.

Regardless of its apparent lack of toxicity, it’s still a good idea to keep these plants out of the reach of children and pets. If you're concerned, you can always go the route of artificial mistletoe.

Good Growing Tip of the Week: In a nod to how the plant is spread, the word mistletoe (mistiltan in Old English) comes from the Anglo-Saxon words mistel (dung) and tan (twig). Mistletoe, or dung-on-a-twig, there may be no more appropriately named plant for 2020.