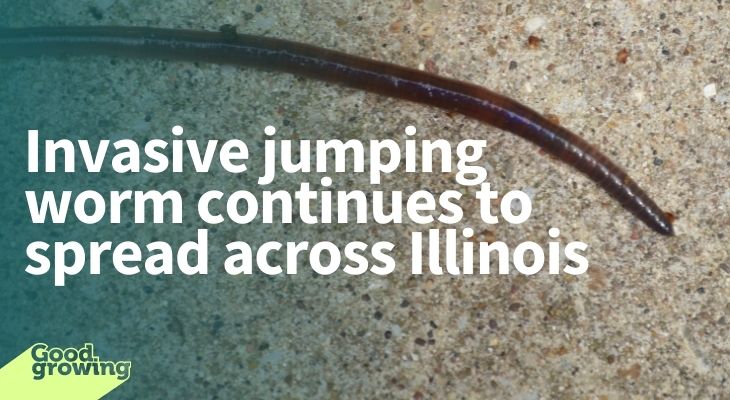 How full is your invasive species radar? All I can say is my view is overwhelmed. Dealing with the current group of Japanese beetles, emerald ash borer, bush honeysuckle, and so many more. Plus, in Illinois, we are girding for the impending arrival of the very destructive spotted lanternfly. Then a notification arrives the USDA has prohibited the import of boxwood, holly, and Euonymus species from Canada to prevent the spread of the box tree moth (Cydalima perspectalis). I didn’t even look that one up to see what it does, but I bet it’s not good. Hopefully, they will nip it in the bud so I won’t have to learn a new invasive species, but reports show infestations at three US inspection sites. Yikes!

Well, if your invasive species cup runneth over as mine does, I’ve got a new one for you that has been confirmed throughout Illinois including west-central Illinois – the jumping worm (Amynthas spp). Yes, you read that correctly, there is now an invasive earthworm crawling through the dirt.

Any reader hip to the world of worms probably is saying, “All earthworms are non-native in North America.” And you are correct. The ice ages of North America’s past did their job in wiping out the presence of earthworms on most of the continent. European settlers reintroduced worms to the soil only a handful of centuries ago.

Well, the pace of the world has only sped up and now in the course of only a few years, we’re seeing the jumping worm move across the country. How are these worms spreading so quickly? If your very next thought is “humans” you’re catching on to some common invasive species themes. The invasive jumping worm is believed to primarily spread through transporting compost and mulch. 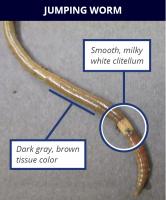 Jumping worm is a large worm, up to eight inches long, and tends to have very glossy skin. Further, there are ways to tell the jumping worm apart from other earthworms. Jumping worm as its name implies will jump, squirm, flip, and perform all manner of impressive gymnastics when touched. Their movement can almost appear snake-like as they thrash in an S-shaped manner.

Another characteristic is the jumping worm’s top and bottom are different colors. As they squirm and jump you will see the opposing flashes of color.

Jumping worms also have a smooth, milky white clitellum (colored band) that completely circles the body and is not raised.

What makes these worms so bad?

Earthworms are good for the soil. At least that’s what most of us have been told. And for the most part yes, many of our common earthworms add to rich soil biodiversity. When it comes to the jumping worm keep in mind it is fairly new to us and hasn’t been studied as long so there are quite a few unknowns. Here are a few things that have been researched or observed:

Is there anything to control these worms?

Unfortunately, not. You can remove adult worms to reduce the amount of egg-laying occurring in the soil. Place them in a plastic bag and set them in the sun where they will quickly die.

Prevention is key if you want to try to reduce the chance your garden becomes host to the invasive jumping worm. Check out this article to help Stop the Spread of Jumping Worms.

Do you think you found jumping worm in your yard? Bring in a sample to your local Extension office for identification.

Good Growing Tip of the Week: Suspect you have jumping worms but don’t see them? You can extract them from the ground by mixing 1/3 cup of ground yellow mustard seed with a gallon of water. This drives the worms to the surface.