Why are there bugs in my firewood? Identifying and managing firewood insects 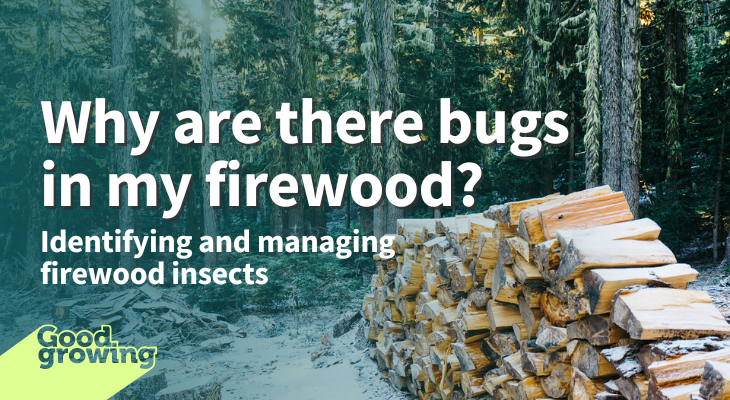 With the arrival of winter-like weather, many of us will be firing up the fireplace. When bringing wood inside for the fire, we can sometimes bring some unexpected hitchhikers. Many insects and other critters will use firewood (or wood in general) as a food source or a place to overwinter. Fortunately, for the most part, they pose little to no threat to us or our homes.

Various beetles will inhabit and feed on wood, including long-horned beetles, metallic woodboring beetles, and bark beetles. While we may see the adults emerging from firewood brought indoors, they aren’t feeding on it; the larvae are.

Longhorned beetles get their names from their long antenna, which can be longer than their bodies in some species. The adults typically range in length from 1/4 to 2 inches long. The larvae are whitish with tapered bodies with no legs. They are probably the most common wood-boring beetles found in firewood.

Metallic woodboring beetles are flattened and often bullet-shaped. Unlike long-horned beetles, they have short legs and antennae and are often, as the name implies, metallic in color. The larvae are whitish and elongate with an enlarged head area (actually the thorax), which is how they get their other name, flatheaded borers.

Both of these groups of insects will lay their eggs in dying, freshly cut, or recently killed trees, so frequently, the eggs are already in the wood when cut. In many species, the larvae will spend a year or more tunneling and feeding in wood before emerging as adults.

Bark beetles are much smaller than long-horned and metallic wood-boring beetles, less than 1/8 inch long. The adults are brown or black and cylindrical. Eggs are also laid on dead or dying trees, and the larvae will tunnel in and feed on wood.

Termites will nest in the ground but may tunnel into and feed on firewood that has been stacked on the ground. Termites that are found in firewood are usually workers, which look similar to ants but are whiteish.

Other critters in firewood

A variety of other insects and ‘critters’ may be found in or on firewood, often using it as a place to over winter. Things like spiders, cockroaches, pillbugs (roly-polies), praying mantid ootheca, wasps, and ants can occasionally be found emerging from firewood once it’s been inside for a few days.

What should I do about insects that emerge from firewood?

Insects inhabiting firewood will often emerge once they have been exposed to warm temperatures for an extended period. Fortunately, the insects that emerge from firewood are only nuisances. The wood in our homes and furniture is too dry for them to live in, so they do not pose a threat to them. If you do find an insect or something else emerging from your firewood, they can be collected and placed outdoors.

There are several steps you can take to reduce the number of insects getting into your firewood:

Good Growing Tip of the Week: As you can see, a variety of insects will inhabit firewood, so source your firewood locally. The long-distance spread of many invasive species, such as emerald ash borer, has been due to the movement of firewood.