Ethnobotany: The power of plants and people 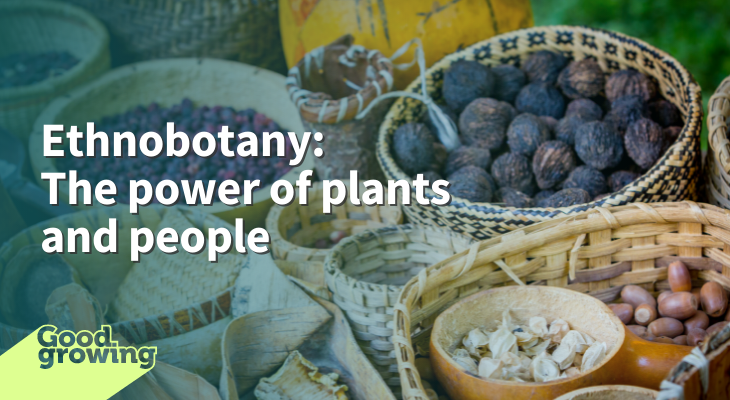 Plants have played a major role in human development for as long as people have inhabited the earth. Human interaction with plants has been and continues to be a complex relationship. Many species have provided critical resources for sustaining life, while others threaten human harm if encountered or used without caution. The scientific field of ethnobotany studies how plants have influenced cultures around the world.

Within the field of ethnobotany, species, people, and physical location change but the one through line is the abundant use of plants. From ancient cultures to the present day, here are a few ways plants and people are intertwined.

Directly or indirectly, plants create the energy that nearly all life on earth depends. Through the process of photosynthesis, plants convert sunlight, carbon dioxide, and water into glucose (sugar) molecules. These sugars are available in many forms of plant material and are the foundation upon which animal life stands.

The most ancient cultures engaged with plants as food. Before plant domestication, large-scale agriculture, global economies, and grocery stores, native plants were a primary resource for sustenance. Many of the foods enjoyed today, as a part of an American diet, originated in indigenous cultures. Well-known species such as corn, beans, and squash, collectively known as the three sisters, have been cultivated in the Midwest for thousands of years. Sunflower, an important oil crop today, is native to North America and was first cultivated by indigenous tribes over 4,500 years ago.

On a global scale, some of the most beloved foods were first domesticated by ancient civilizations. Tomatoes are native to central and south America and were domesticated thousands of years ago. The Incan people are among those credited with cultivating potatoes over 8,000 years ago. The Aztec Empire is credited with being the first to cultivate peppers and create chocolate from the seeds of cacao (Theobroma cacao).

Plant fiber is essential in the human diet and helps with digestion. These dietary fibers are found in fruit, vegetables, grains, and legumes of the human diet. However, not all plant fibers are consumable. Within a plant, some fibers function to physically support plants. These types of fibers have been harvested and utilized by people in various ways. The heartwood of trees is a strong building material. The thin outer bark of trees such as Paper Birch (Betula papyrifera) was used to cover tepees or waterproof wigwams and make snowshoes, baskets, buckets, and water vessels. Leaves and roots were harvested and used as twine or sewing materials such as jute, hemp, and flax.

Indigenous cultures have relied on plants for nearly all aspects of cultural development. Many more uses exist than those discussed here. Below is a brief examination of additional ways plants have influenced culture.

For western cultures, November and December are filled with celebrations. These modern cultural events are also deeply connected to the plant world. Shared meals, festive decorations, and gifts of thanks are often plant-based and full of symbolism and tradition.

Good Growing Fact of the Week: In lab studies, plant chemicals have demonstrated the ability to stop the growth of some forms of cancer cells.

Sign up for our emails! Want to get notified when new Good Growing posts are available? SIGN ME UP