Edible wild mushrooms are more than just your next meal 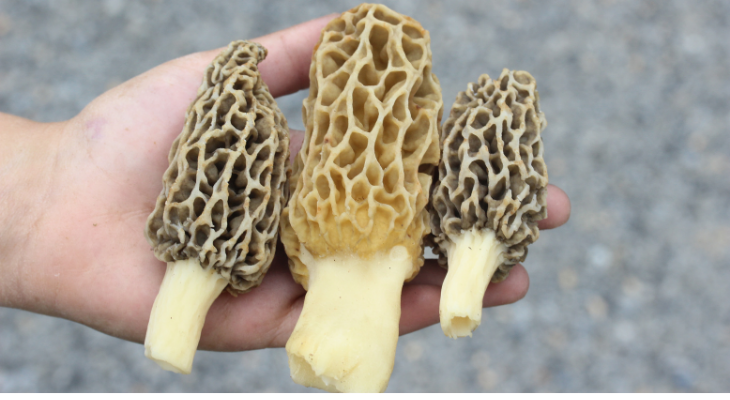 “Forty-two pounds of Edible Fungus
In the Wilderness a-growin’
Saved the Settlers from Starvation,
Helped the founding of this Nation.”

While this song telling of the miraculous feats of edible mushrooms was part of a fictional story, it does underscore that we eat a lot of wild mushrooms. Commercially available, buttons, portobellos, shiitakes, and other varieties just aren't enough for some and foraging for wild mushrooms is a favorite pastime throughout Illinois.

Morel mushrooms definitely rule the spring, but there are quite a number of other edible mushrooms that can be found growing in Illinois, including pheasant backs, oysters, chicken-of-the woods, chanterelles, lion’s mane, black trumpets, and my personal favorite - the hen-of-the-woods.

If you know your mushrooms, you can collect wild edible mushrooms all year long!

While many people are avid foragers, some may not know just what mushrooms are.  Mushrooms are actually the fruiting bodies of larger organisms called fungi. Think of a mushroom as the apple and the fungus as the tree.

Fungi grow typically as a dense mass of thread-like cells. This mass is called mycelium. If you ever pulled loose bark off of a rotting log, the white or light brown threads that fan out across the surface of the rotting wood is part of the mycelium and is the main body of the fungus.As the mycelium collects energy and continues to grow, it can produce mushrooms for reproduction, to form and release spores.

There are many, many different types of fungi and not all of them produce mushrooms. Even the mushroom-producing types of fungi vary greatly in their life-histories. Some grow on living trees, others only on dead wood. Still others are only found growing out of the soil. One strange fungi, the lobster mushroom, actually is a parasitic fungus that attacks other fungi.

Fungi are not like plants in that they do not produce their own food through photosynthesis. Instead, they need to capture their energy from other sources. Many species are pathogenic, meaning they attack and feed off of other organisms.

A great example of this is the “honey mushroom." The fruiting bodies are a select edible mushroom, but the fungus itself (Armillaria ostoyae) is actually a serious forest disease as it infects tree species, causing the roots and lower trunk to decay, potentially killing the tree.

Saprophytic: Other fungal species are saprophytic, feeding on dead organic matter.  Morels fall into this category. Some saprophytic mushrooms grow on dead wood, such as chicken-of-the-woods and oyster mushrooms. Others grow on organic material in the soil.

Mutualists: A third group of mushrooms are mutualists. These species work with their host organism to the mutual benefit of both species. Many of our native plant species actually need the help of a fungus to grow.  These fungi will associate with the roots of plants to form structures called mycorrhizae that help uptake nutrients and transport water to the plant roots. Edible mycorrhizal mushrooms include chanterelles, which are some of the most common edible mushrooms growing in Illinois during the summer, and truffles, which compete with morels as being the most famous wild mushrooms worldwide.

Mushrooms in the Ecosystem

All of these edible wild mushrooms, along with the thousands of non-edible species, are incredibly important to the ecology of our native ecosystems.

Wood rotting fungi help create dead snags and tree cavities, which are critical habitat for many wildlife species. Saprophytic fungi help create rotting logs, which are home to many insects, salamanders, and even frog species. These fungi also enrich the soil through the release of nutrients by decomposing organic matter. Mycorrhizal fungal in the soil are a vital link to the diversity of plant species in our native forests.

The next time you are out foraging for wild edible mushrooms, you can appreciate these wonderful organisms for more than just their taste!