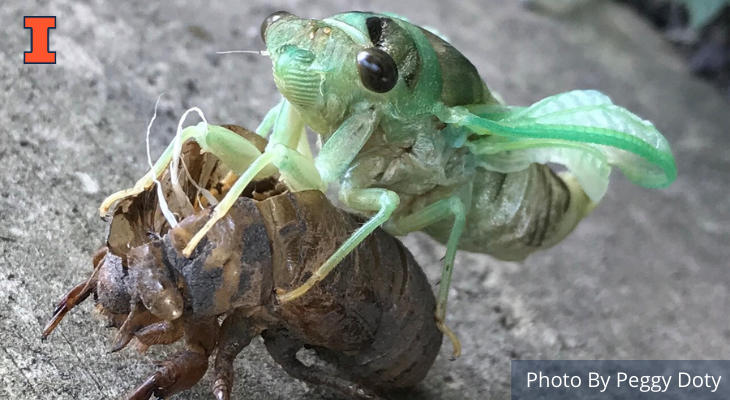 The cicadas are coming! In May 2021, Periodical Cicada Brood X (Brood 10) also known as the Great Eastern Brood is expected to emerge in four eastern Illinois counties - Vermilion, Edgar, Clark, and Crawford.

But the broods that will affect most of Illinois are yet to come. Brood XIII and Brood XIX are set to emerge in 2024 according to the U.S. Forest Service. We have a few years to buy earmuffs against the deafening screech, but it’s still worth taking a closer look at these fascinating creatures.

The periodical cicada (Magicicada spp.) is comprised of three different species, but several different breeding populations. These cicadas have life cycles of either 13 or 17 years which makes them the longest living known insect.

Think of it this way: the Great Eastern Brood has not seen the light of day since 2004. Rod Blagojevich was Illinois' governor, the summer Olympics were in Athens, and President George W. Bush was running for reelection.

Little is known about what these cicada nymphs exactly do over that 17-year period, but one thing researchers do know is that they eat. For 17 years, with their sucking mouthparts, they will suck on the roots of shrubs and trees for nutrition, fattening up for the day they will arrive in great droves. The cicada nymphs will emerge from the ground once the soil temperature reaches 64°F and immediately crawl to a vertical surface to molt into their adult form. If over that 17 year time period, there was construction or new development, that particular population could have been wiped out.

Life on the surface

Once they have molted (the above photo is a newly molted cicada) and fully dried out, their exoskeleton is a dark black/brown color and their eyes are a red/orange with wing veins to match.

Then within three days, these adult insects will do what they are meant to do, breed and spread. The males will make their infamous screeching noise to attract females. Once fertilized, females will deposit their eggs by splitting the bark of trees and other woody species. They will do this for 3-4 weeks sometimes laying more than 600 eggs in their lifetime and taking very little time to eat. After several weeks, the eggs hatch, and tiny, antlike cicada nymphs crawl down from the trees and shrubs and burrow 2-24 inches into the ground to start the cycle over again.

The lifecycle of these insects seems simple, but the extended period of time begs some fascinating scientific questions regarding the evolutionary benefits of this timeline as well as the distinction from its annual counterparts. We do have annual cicadas in Illinois that emerge later in the year - July to September - but what benefit does a 13- or 17-year life cycle have for these periodical cicadas?

The mass emergence of the breeding populations is an evolutionary strategy against predators. These true bugs are clumsy fliers and quite large, therefore they are easy pickings for birds and other insectivores. Therefore, their mass emergence allows them to sacrifice a few while the insectivores engorge themselves until they are full- leaving the rest of the population to fly past the stuffed predators.

Little is known about these insects because of their infrequent appearance so we have a lot to learn. I’m sure these fascinating insects have much to teach us about the benefits of waiting it out, waiting for the right moment, or perhaps it is one of those evolutionary flukes that nature has really dove in on. Either way, it’s another very interesting piece of our natural world that continues to fascinate me to this day.

Do you have cicadas or something else?

Think you have periodical cicadas (and live in Illinois)? Evidence of their emergence is typically characterized by hundreds of holes in the ground, but unless you live in the four counties listed above, it is more likely that these holes in your yard are from crayfish, digging wasps, or bees.

To find out what is causing the holes exactly, it could be fun to watch the area (from a respectful distance) to see if any bees or wasps return or if another type of animal emerges.

ABOUT THE AUTHOR: Abigail Garofalo is an Energy and Environmental Stewardship Educator for Cook County. She manages the Cook County Master Naturalist program and the Conservation@Home program for University of Illinois Extension. She has a BS in Natural Resources and Environmental Sciences and MS in Agricultural Leadership Education both from University of Illinois Urbana Champaign. Her background in is environmental outreach and interpretation and works to create a culture of environmentalism through community building.