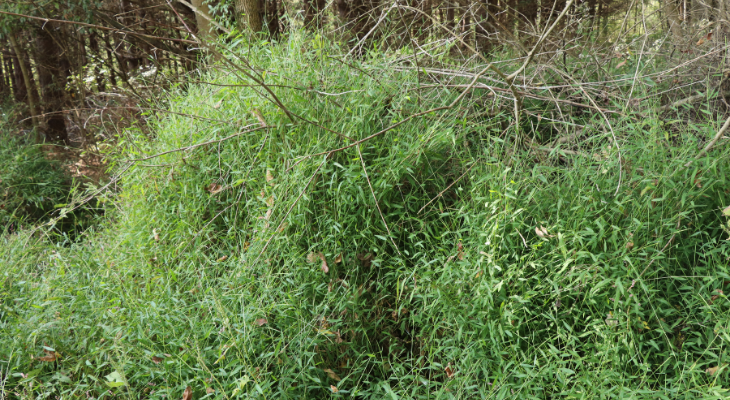 I am sure that most of us are familiar with the concept of invasive species - non-native organisms that are introduced into a new environment and take advantage of the lack of natural checks and balances to run amok and impact our native species and natural ecosystems.  My first introduction to invasive species was when I was a kid, growing up in the southern United States, seeing the invasive vine kudzu swallow entire trees.

While we do have kudzu in Illinois, there are other invasive plants that, while not as visible, are more impactful to our ecosystems.  One such species is Japanese stiltgrass, Microstegium vimineum.  It also sometimes is called browntop or packinggrass.  This species was first found in Illinois in the 1960s along the Ohio River, but now is in at least 28 counties spread across the state.

Japanese stiltgrass is a bit of an unusual species in terms of grasses.  It is a warm-season, annual grass that thrives in even the heavy shade of a forest understory.  There aren't many other species that fall into that same category.  What that means for stiltgrass is that, while it germinates early in the season (March in southern Illinois), it waits for the heat of mid-summer to kick into gear and put on most of its growth and doesn't usually flower and set seed until late summer or early fall.  Still more unusual, this species has two forms of reproduction. One is the typical open flowers on spikes that utilize the wind to disperse pollen that may land on the stigma of another stiltgrass flower to achieve pollination.  But the second form of reproduction is via hidden, closed flowers that occur in short spikes buried near the bottom of the plant.  These cleistogamous flowers do not open up but instead self-fertilize to create viable seed, which are often present on stiltgrass much earlier in the year than those produced by the open flowers.

Stiltgrass prefers moist bottomland soils and partial shade, but is capable of growing in a wide range of conditions, from dry rocky uplands to open fields and even deep shade.  Stiltgrass has been shown to negatively impact biodiversity, alter nutrient cycling and soil biota, and even change fire behavior. 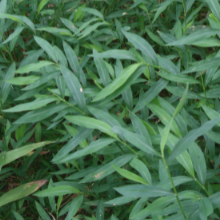 Since Japanese stiltgrass is an annual plant, it has a weak root system and pulls easily from the ground.  A few of the roots arise from higher up on the stem.  These aerial 'stilted' roots are clearly visible and give the plant the stiltgrass name.  The stems are thin and sprawling.  The leaves are abundant and short (3-4" long) and wide (0.5-0.75" wide).  Oftentimes a whitish or silver midrib is visible on the leaves.  Stiltgrass is often described as looking like a miniature bamboo.  A few native grasses look somewhat like stiltgrass, but have perennial root systems that do not pull out easily. A detailed guide to the identification of Japanese stiltgrass with comparisons to look-a-like species is available.

Stiltgrass is even easily identified in winter as it leaves an abundance of straw-colored thatch on the forest floor.

Since stiltgrass is an annual plant, successful management should strive to halt seed production.  Small stands of stiltgrass can be hand-pulled.  Weed-whipping or mowing close to the ground just before flowering can reduce seed production. Herbicides, including grass-specific herbicides, have proven effective at control when applied before flowering.  Pre-emergent herbicides are effective when applied in early spring before seed germination.  Late growing season burns have potential to reduce seed production.  Regardless of management techniques, repeat treatments will be necessary.  Stiltgrass seeds can live over five years in the soil, though most of them germinate that first year.

Japanese stiltgrass is still actively spreading throughout Illinois.  The small seeds can easily be picked up in mud on tires, shoes, or even horse hooves.  Cleaning these items and anything else that may carry soil and seeds is important, especially after leaving areas with known stiltgrass populations.  Reporting new suspect populations of stiltgrass can help biologist and managers track stiltgrass and initiate management on new infestations early. Reports can be made through your local Extension office or through the EDDMapS program.

In 2010, the River to River Cooperative Weed Management Area hosted the Stiltgrass Summit in southern Illinois.  The meeting website includes a summary document and links to videos of each presentation.

Control of Japanese stiltgrass and other herbaceous invasive plants was covered in a recent webinar by Extension Forester Chris Evans.

EDDMapS provides updated distribution maps for Japanese stiltgrass and many other invasive species.  Additional reports can be added to EDDMapS easily through their various smartphone apps.