Scat Chat: What animal droppings can tell us 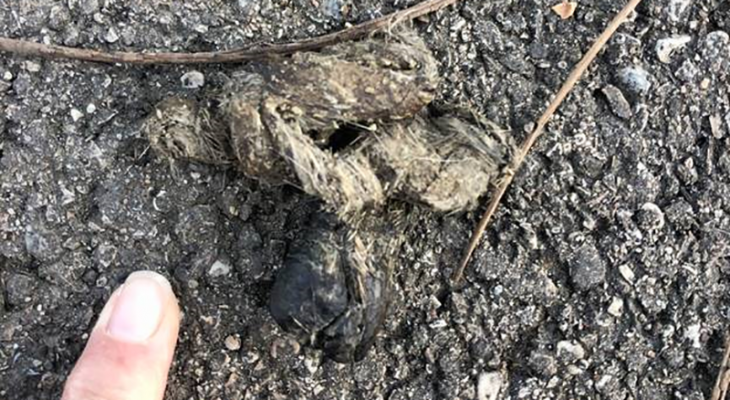 We call anything an animal leaves behind a sign. It could be a broken branch, a footprint, a scrape on the ground or tree, a nest or other home, their own fur, or even animal parts from their last meal.

Of all the signs scattered for our inquiry as to what or why, the scat is my favorite and a most appreciated indicator as to who has been there. You need not have anything but a firm stick from the ground to investigate it fully.

The Science of Scatology

Scatology, the study of excrement, is one of the most fascinating sciences for researching and understanding the life of an animal. Whether you call it poop, dung, waste, deposit, turdlet (I made that up), or the “s” word, it all adds up to a very lively conversation between scientists over lunch.

The scat deposited on an animal’s daily commute is a data gold mine for studying a species. As an assistant to wildlife graduate students when I was in college, it was my job to jump out of the van each time it stopped on a random road and scrape up coyote scat. It was during prime fawn season. Coyotes like to defecate on flat surfaces when they can, or at least not have anything brushing their fanny while they go, so gravel roads are a perfect potty. The graduate students were looking for the remnants of fawns and occasionally there would be a full hoof in the scat, which made it easy to confirm their diet.

What can scat tell you?

For the wandering naturalist, scat can tell you who is in the area, how long ago they passed by, and what they are eating. Gathering macro information, you can determine what species you have because all animals have a poo MO (modus operandi).

Just for fun, and not native to our country, is the wombat who poops in adorable little rounded cubes, kid you not!

Seriously though, scientists are finding the use of scat as a way to collect critical data without disturbing the animal. There is no stressful capture or hazing of the creature. There is no worry of tranquilizing with a guesstimated amount of sedative needed to incapacitate with no harm. Scat is the most available product from an animal, and it can be collected and frozen for later study.

All cells in the animal body have some DNA. The intestines are always working, which means there is a constant sluffing of cells in large quantities. I am sure you see where this is going. Scientists can not only use the DNA from the scat to identify a species, they can identify an individual animal. This means with enough samples you could map an entire group in a large region simply by their scat.

This has been used to identify elephants by matching DNA to ivory and linking it to the region the animal lived. Scat then becomes critical in finding poachers and in turn protects sensitive megafauna from potential extinction. Read the full story about the elephant research here.

For data purposes, the best scat are those newly deposited. The fresher the scat the more intact the mucus layer is on the outside. This layer is created by the walls of those overactive intestines.

So, if we look at a scat sample as a bio-monitor or its very own research paper, this mucus layer would be the data pages holding the most information. It can tell a scientist about the overall health of the animal with various indicators:

Scat can show how healthy the environment is

Another example of using scat as an indicator of environmental health is the study in Seattle, Washington on river otters. River otters are predators and eat many fish and crabs, along with a variety of other prey. The fact they eat many creatures who feed in the sediment of the Duwamish River makes them a living research specimen.

There is a designated Superfund site on part of the river and all those lower animals on the food chain are snacking on things like PCBs and other toxins. These then collect in the otters in what is known as the magnification effect. This means one dinner item might be bad, but when all your diet has toxic levels of pollution they build up in your system, and you guessed it, show up in the mucus layer of the otter’s scat.

The best part is how easy it is to collect otter scat. Otters like to use a communal latrine, so you always know where to find the poop and have a good chance of getting it while all the best data is still available. In Seattle, they are planning a 17-year cleanup and it includes checking the otter scat for improved conditions in the river.

So now you know more than you wanted about scat but the next time you are on a trail and you spot a particular excrement I hope you consider all the information it holds, other than the odor. Note the habitat you are in and then drop a coin or something standard next to it and take a photo for later inquiry. The item placed with it helps put the scat in perspective. Feral cat scat and cougar scat may look very similar, but it is important to know which one is which.

ABOUT THE BLOG: Naturalist News is a blog by University of Illinois Extension Master Naturalist staff and volunteers who bring you stories highlighting the individuals, places, wildlife and plants that make this state amazing. Join us each week to learn something new, be inspired and become connected to your own community by recognizing the amazing ways we are all intertwined.