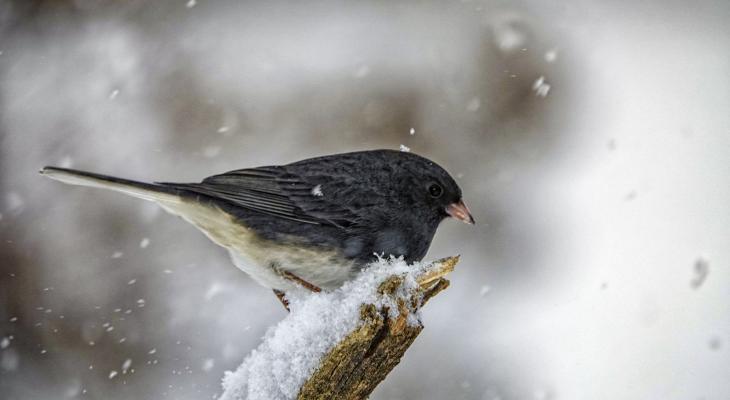 Spring is a mere 90 days away, and every year sightings of the first American Robin (Turdus migratorius) are hailed as the spring weather harbinger, but did you know we have a winter weather welcoming bird, too? It is that funky, fidgety, little member of the sparrow family — the dark-eyed junco (Junco hyemalis).

Also called the ‘snowbird,’ dark-eyed juncos show up in Illinois as soon as it gets cold. Why would this tiny bird come to the area for winter, when so many other wild birds are heading for warmer climes?

For a possible clue, look at their breeding range. Juncos are more northern dwellers when it comes to breeding, choosing cool summer Canada and Alaska. The dark-eyed junco clutch is 3 to 6 eggs with 1 to 3 broods per season. The females determine the nest site, which is usually in a natural depression in the ground (high rodent predation) or occasionally in a tree. Incubation is 12 to 13 days and the young fledge a quick days after hatching.

But in the non-breeding season, winters in Alaska and Canada are much longer, darker, colder, and rougher typically than Illinois winters. Although it may not seem like it to us, we have more daylight for foraging, and less severe weather — just perfect for this little cold-weather bird.

Dark-eyed juncos are one of the most abundant forest-dwelling birds in North America. Year-round they can be found inhabiting the coniferous and deciduous forests of the western mountains and Canada. But Cornell University dubs the dark-eyed junco ‘the snowbird of the middle latitudes.’ because here in the middle, they flood in for winter in fairly large flocks.

In these flocks, there is a hierarchy giving preference to the earliest arrivals. During winter, dark-eyed juncos expand their habitat to include open woodlands and fields, roadsides, and on the ground birdfeeders in the home landscape.

Which junco is which and where?

West of the Rocky Mountains, male dark-eyed juncos are often the Oregon form with a dark brown hood, a light brown back, and a white belly. East of the Rockies, including Illinois, dark-eyed juncos are the slate form with dark grey back feathers with a darker grey (or black) hood. As with most birds, the females have a drabber coloring in muted tones of brown, tan, and white to camouflage them from predators as they sit on the nest. Beaks are light in color with a blush-pinkish tone. Their little beady black eyes seem to vanish into that dark hood of feathers.

But just where were the juncos this year?

In Northern Illinois, juncos usually tend to show up when the first flurries fly, and it is interesting that in 2021-2022, several calls came into the Extension office wondering just what happened to the juncos because no one had seen them yet. The first spotting is often mid-October. On a related note, we also fielded several calls about why hummingbirds and monarchs were still begin spotted late into October.

There is still much to be researched and understood about what combination of factors actually signals migration. What we do know with 20/20 hindsight is that we have had one of the hottest years on record — including an unusually very warm entire month of October.

Somehow our migratory birds and insects knew more than the forecasters that we were going to have that long warm fall and delayed their migratory yearnings. Sure enough, just before our first cold snap in late November, reports of juncos appearing at backyard feeders started coming in.

When they do arrive, you will see them hopping or flitting with a little stutter-step in leaf litter looking for food. According to Cornell University’s All about Birds website, dark-eyed juncos are primarily seed-eaters. A majority of their diet, 75%, consists of chickweed, buckwheat, lambsquarters. In the breeding season, they add insects to their diets.

Males sing in a trill of notes that last up to 2 seconds with an amazing 7 to 23 notes, but it is quite soft, and you can’t hear it more than 40 feet. Their calls are a high short chirp that they do in rapid succession when they fly and eat which is thought to encourage other juncos to follow. When feathers fly during aggression, you may hear a sharp ‘kew’ sound given by the dominant bird.

But as early as February some years, it seems that the little grey birds are suddenly gone, winging their way back to their northern summer homes for breeding season in Canada and Alaska. So as you take your winter walks on the wild side, look for this little bird of winter before they are gone.

MEET THE AUTHOR
Nancy Kuhajda is the Agriculture and Natural Resources Program Coordinator for the Master Naturalist, Master Gardener, and Master Composter Programs in Will and Grundy Counties in Northeastern Illinois. Nancy has a bachelor's degree from the University of Illinois at Urbana-Champaign and has Graduate Certificates in Crop Science and Horticulture. Nancy also writes a weekly column for a local Joliet paper on nature and gardening topics. Nancy's passion is to bring understanding of the natural world to the community at large but particularly to the underserved urban youth, special needs, and elderly in congregate housing in the community.

ABOUT THE BLOG
Naturalist News is a blog by University of Illinois Extension Master Naturalist staff and volunteers who bring you stories highlighting the individuals, places, wildlife, and plants that make this state amazing. Join us each week to learn something new, be inspired, and become connected to your own community by recognizing the amazing ways we are all intertwined. Want to get notified when new Naturalist News posts are available? SIGN UP HERE!