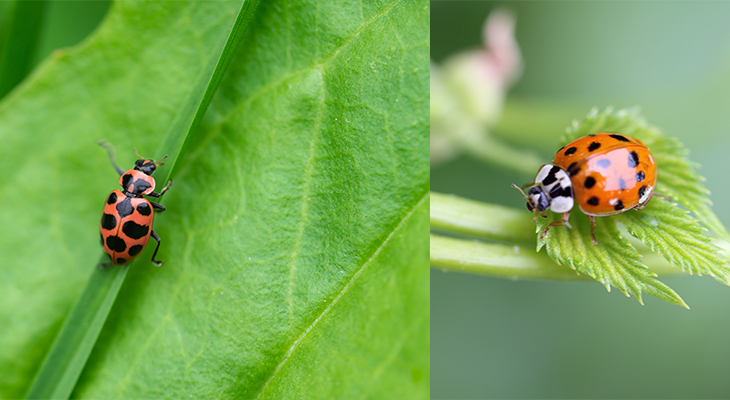 When I put my blog choice in for ladybugs versus lady beetles, I thought it was going to be an easy write-up. A piece about our native ladybugs and the seemingly invasive biological control animal I like to call the Terminator Lady Beetles.

It would be a good guy versus bad guy story. Ladybugs, the good guys, who eat aphids from our flower and vegetable plants versus the bad guy predators who bite and move into our homes in the fall with no intention of paying rent.

I have distinct childhood memories of “real” ladybugs, the pink spotted ladybug, Coleomegilla maculata. This is the insect on the left in the above photo. They were precious little pink ovals with six spots per wing that emerged in early spring from their leafy lair under the shrubs and peonies in my neighborhood. Any young naturalist knew that given only a firm short stick; one could find an entire city of these little gems by gently poking around when the cool spring rains replaced the frosty snowflakes of winter.

I was in love with “the” ladybugs and would let them walk up the stick and onto my hands. After the Gulliver’s Travels-like disruption, the little beetles would spread out and be seen only a few at a time for the rest of summer.

Then in the 1980s, I started seeing these robust little beetle beasts where the ladybugs used to be in large numbers. Some had spots and some did not. My father said they were from Asia and we needed them to eat the excess aphids from our field crops like alfalfa. It was a quick decade later and I saw less and less of my beloved yard pets and more of the red ones who, given a moment on your arm, would bite you just for a taste.

What are lady beetles?

So, a quick trip through some insect journals to learn more and it turns out there are around 5,000 different species of lady beetles globally, with a few hundred in the U.S. alone. Multiple sources agreed with the 5,000 but none had the same number for the U.S. They are in the family Coccinellidae which means “little red sphere.” When I read this, I was shocked because the ladybugs I knew were not red nor sphere-shaped.

The blog just got complicated. It was not one good and one not-so-great insect; it was thousands of lady beetle species!  Many of them round and with a different number of spots if they had them at all. It was difficult to find my childhood friend amongst the thousands and it never appears in any of my field guides! What was happening?!

I was confident all lady beetles have true insect characteristics: head, thorax, and abdomen. Even though many varieties look like they only have an abdomen with a little head stuck on one end. This includes the Asian lady beetle, Harmonia axyridis, which was brought to the U.S. specifically for eating aphids on crops. It is shown on the right in the above photo.

The elyrtra are hard wings that protect the soft folded veiny wings below which are used for flying. If you ever see a ladybug take flight, the two elytra open like a car with gullwing doors to allow the smaller wings to stretch to full length and help the beetle float away through the air with the grace of Mary Poppins.

In the spring, the beetle predators seem to know the aphids are available to consume. They begin mating and start eating. Eventually, the females lay small clutches of eggs on the underside of early spring plants.

All lady beetles have a holometabolous life cycle. It starts with an egg, goes through four instars, a pupa stage, and finally becomes an adult. The female beetle will most often lay her eggs where there are plenty of aphids to feed on. The lady beetle larva tends to surprise most people because they don’t look a thing like a lady beetle, but more like a spiny striped miniature alligator.

At Extension, we get contacted about the lady beetles most often in the fall when people are noticing them more in their house than outside. Like many insects, the lady beetle starts seeking small crevices to gather in large numbers and begin diapause, the name for insect hibernation. They often inadvertently crawl into basements through cracks in the foundation.

I rarely get a call about the native pink spotted ladybugs moving indoors. The Asian lady beetle’s self-invitation causes my phone to ring as early as Halloween. Most people, not so much a naturalist, won’t tolerate even a single bug in the house so imagine the call when someone locates an entire yard full of lady beetles in the corner of their basement.

If you disturb any lady beetle, you will be amazed at the amount of foul smell from a yellow discharge they can admit through their leg joints. This is their defense mechanism that keeps other animals from wanting to snatch them up.

Recommendation for removal: I always suggest sweeping them up if you want them out of your house because if you vacuum up a pile of them in the winter the smell will make you change the vacuum bag before it's full. Spraying them with a pesticide is truly unnecessary and potentially harmful to you as well.

Whether the native pink spotted ladybug or the Asian lady beetle, they provide all of us a free ecological service by consuming the aphids that can destroy our plants. That said, I will forever be on team Pink Spotted!

ABOUT THE AUTHOR: Peggy Doty is an energy and environmental stewardship educator who has been with University of Illinois Extension for more than 20 years. She holds a B.S. in zoology from Southern Illinois University and a Master of Educator from Northern Illinois University. She is interested in human and wildlife interactions, supporting native pollinators and water resources.

ABOUT THE BLOG: Naturalist News is a blog by University of Illinois Extension Master Naturalist staff and volunteers who bring you stories highlighting the individuals, places, wildlife and plants that make this state amazing. Join us each week to learn something new, be inspired and become connected to your own community by recognizing the amazing ways we are all intertwined. Want to get notified when new blog posts are available? SIGN UP HERE!