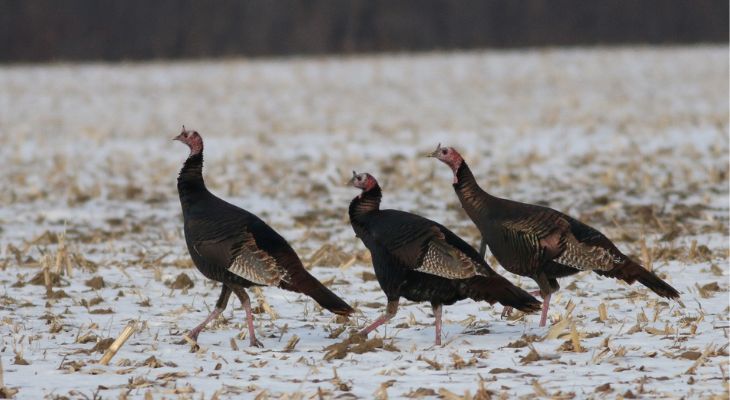 From turkey hands made by schoolchildren to presidential pardons at the White House, November is turkey time. And while we may think we know a lot about these birds, here are a few things that might be new to you.

Wild turkeys, (Meleagris gallopavo) are one of only two domesticated birds that are native to the Americas. The Muscovy Duck is the other. In fact, turkeys have been around for a long time. Turkey fossils found in the Southern U.S. and Mexico have been dated back to 5 million years ago.

Populations of wild turkey declined significantly in the late 1800s and early 1900s. Early conservation efforts included releasing domesticated turkeys into the wild which did not work. But in the late 1940s, they started a program of capturing wild turkeys and transplanting them to suitable habitats. The wild turkey numbers responded positively and today has one of the best responses to conservation efforts for game birds. Hunting permits for wild turkeys are allowed in 49 states, turkeys aren’t found in Alaska, and are only second to deer in their popularity with hunters.

Not only can they run up to 18 mph on foot, they can fly over 35 to 50 mph for up to a mile. And when they need to, wild turkeys can swim. Yes, swim! They tuck their wings in close to their bodies, spread their tails and kick with their legs. Who knew? But, as anyone who has seen the Thanksgiving episode of WKRP in Cincinnati knows, domestic turkeys don’t fly well.

Turkeys do more than gobble

While male turkeys are known for gobbling, often from up in a tree so the sound will travel farther, both males and females make several calls, including a purr-like noise and whistles, clacks and a “clump-like” sound.

And finally, you can identify a male or female turkey not only by the feathers but by their scat. Male turkeys generally excrete a “J”-shaped scat, while female scat tends to swirl into a coil. Yes, scientists have study this and have size ranges in length and diameter as well. Who knew? It all comes down to the anatomy of the bird, one of which lays eggs and the other that doesn’t.

Benjamin Franklin wanted the wild turkey as the national bird

According to The Franklin Institute, this is a myth. This notion seems to be in response to a letter Franklin wrote his daughter where he criticized the drawing of the national seal, saying the eagle in the center looked more like a turkey.

He then went on to say:

“Bald Eagle...is a Bird of bad moral Character. He does not get his Living honestly…[he] is too lazy to fish for himself. …(the turkey is) a much more respectable Bird, and withal a true original Native of America...He is besides, though a little vain & silly, a Bird of Courage.”

So, while he did defend the honor of the turkey, he did not advocate for it to be the national bird.

According to the myth, the naturally occurring amino acid, L-tryptophan in turkey makes you sleepy. In truth, all meat contains this amino acid as well as cheese, fish, and eggs. So, you should be sleepy after eating these foods as well, not just the turkey.

It is probably the overindulgence, that makes us sleepy after the Thanksgiving meal.

The basic premise of the myth is this, in a rainstorm, a turkey will turn its head upward to observe the raindrops and then stay in that position until they drown. Essentially saying that turkeys are too dumb to survive. Turkeys are known to stare up into the sky and some do in fact have a genetic condition called tetanic torticollar spasms, which can result in some strange behaviors like looking up at the sky. But no turkey suffering from this condition has ever been documented to have drowned in a rainstorm.

They have a very good sense of geography can learn great details about a large area. Great for finding food. They also have been observed engaging in problem-solving behavior. And of course, they have been around for millions of years so how dumb could they be?

So, as you gather with your family and friends for the holidays, avoid the conversations about politics and dazzle them with turkey facts.

MEET THE AUTHOR: Wendy Ferguson coordinates the Master Gardeners and Master Naturalists program for Henderson, Knox, McDonough, and Warren counties. She helps bring community members quality educational programming and outreach through a number of science-based events. She has a bachelor’s degree in environmental studies from Eureka College, completing an undergraduate research experience with the National Science Foundation on garlic mustard. She obtained her Master’s in environmental studies with an emphasis on writing and communication at Green Mountain College, where she taught nature journaling to graduate students and interned for Terrain.org, an online environmental journal.

ABOUT THE BLOG: Naturalist News is a blog by University of Illinois Extension Master Naturalist staff and volunteers who bring you stories highlighting the individuals, places, wildlife, and plants that make this state amazing. Join us each week to learn something new, be inspired and become connected to your own community by recognizing the amazing ways we are all intertwined. Want to get notified when new Naturalist News posts are available? Sign up here.