The rise and fall of the invasive gypsy moth in Illinois 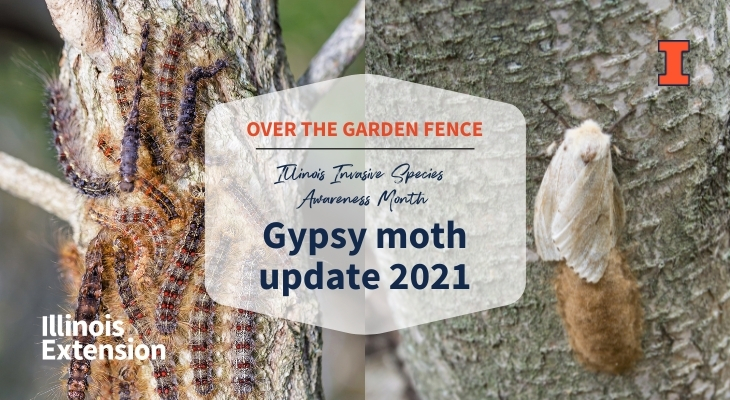 For more than 20 years, the Illinois Department of Agriculture (IDOA) has been continually monitoring gypsy moth in an effort to track infestations, put quarantines in place, and provide treatments.

Gypsy moth caterpillars are voracious eaters and can cause major defoliation. They will feed on more than 500 different kinds of trees and shrubs. Some may recall Lake County’s quarantine in 2000. McHenry, Cook, and DuPage counties were identified in 2007, and a decade later, Will, Kane, Kendall, and LaSalle were added.

A feel-good story in the gypsy moth saga is there are no treatments planned in Illinois in 2021. This really demonstrates the effectiveness of previous surveys and treatments. It is critical to make the treatments at just the right times to control a higher percentage of gypsy moth (successful in 2020 even with the pandemic). One such elimination of gypsy moth occurred at the Morton Arboretum in Lisle, Ill.

The second half of that story is homeowners and the general public spent more time outdoors – gardening, walking, jogging, and doing outdoor socially-distanced activities – and as a result, there has been more observation and awareness of pest issues, including gypsy moth. Reports to IDOA have increased, and sightings have included all stages – egg masses, caterpillar feeding, and adults (usually the females, as they are easy to identify given their bright coloring).

Couple the increased reporting with the more than 11,000 gypsy moth survey traps in 2020, and you can see the whole picture. Trapping happens throughout Illinois between IDOA and the Federal Animal Health Plant Inspection Service’s (APHIS) Plant Protection and Quarantine (PPQ) program. Efforts target both previously infested areas and the remainder of Illinois. This data allows for better interpretation and analysis of populations, which in turn allows IDOA to focus on critical areas for future treatments.

What can you do to help?

IDOA works to manage a variety of invasive species besides gypsy moth. Insects include Emerald Ash Borer, Asian Longhorned Beetle, Spotted Wing Drosophila, Marmorated Stinkbug, and most recently the Spotted Lanternfly. Plant disease is yet another area monitored; Boxwood Blight and Thousand Cankers Disease of walnut are just two examples. In addition, other agencies do similar work with invasive species, such as Illinois Department of Natural Resources with Asian carp and Zebra mussels.