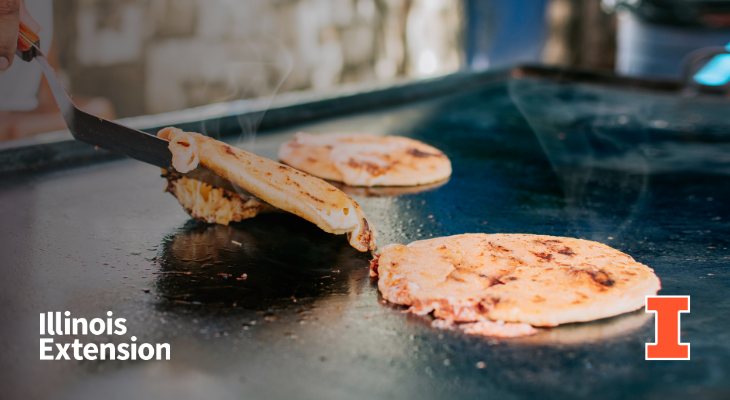 National Hispanic Heritage Month runs September 15 through October 15. It’s a special time to recognize and celebrate the cultures, traditions, and contributions of Hispanic and Latino/a/x individuals. While Hispanic and Latino are often used interchangeably, they have two different meanings. Hispanic refers to those whose descendants are from a Spanish-speaking country, while Latino refers to those from Latin America. Latino can include males or all genders, Latina includes females and Latinx is a gender-neutral term. The use of these terms is not without confusion and controversy.

Hispanic and Latino cultures have had an enormous influence on American food. Mexican food is the third most popular type of food on a restaurant menu and accounts for 7% of all restaurants in the U.S. However, it’s important to note that Latin American cuisine does not simply mean that it’s a product of Mexico. The diversity of Hispanic and Latino food stretches over Latin America, including Mexico, Central America, the Caribbean and South America.

Common foods in Mexico that have taken root in America include refried beans, Spanish rice, pico de gallo, and flour and corn tortillas. Travel to the tip of Mexico near the Yucatan Peninsula and you’ll likely find dishes you’ve never tried, such as sopa de lima (lime soup) or panuchos (tortilla stuffed with beans and fried). In Central America’s El Salvador region, you’re sure to have pupusas (a corn flour pancake filled with cheese, bean or meat filling). Ripe plantains, sweet potatoes, and cassava are commonly served as accompaniments. Seafood dishes, and la bandera (a dish made with red bean, white rice and meat) are popular in the Caribbean, as well as tropical fruits like papaya and mango. Common South American dishes include arepas (flat cornmeal cakes often eaten as a sandwich) and ceviche (raw seafood cured in citrus juice). What better way to celebrate National Hispanic Heritage Month than to indulge in some tasty Latin American foods?

In a large saucepan, heat water, cinnamon sticks, piloncillo, orange zest and juice until boiling. Turn heat down and simmer, stirring until piloncillo is dissolved. Add the pumpkin pieces and simmer, covered, for 30 minutes. Remove the lid and simmer for an additional 1 hour or until pumpkin is fork tender and the sauce has reduced to a glaze. Remove cinnamon sticks. Serve pumpkin warm, drizzled with the syrup. Store leftover pumpkin and syrup in the refrigerator for up to one week.

Mic Foods. The diversity of Hispanic cuisine, from Mexico to the Patagonia. https://bit.ly/3QOC9Re