Add some color to your winter landscape by growing holly 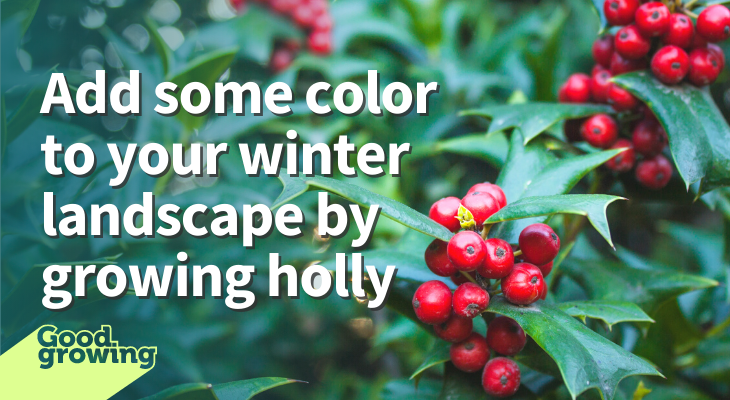 Needled evergreens like pines, firs, and spruces get most of the attention this time of year. However, broadleaf evergreens like holly also make an appearance during holiday festivities. In addition to providing some decoration for the December holidays, they are also great plants in the landscape. They can provide some winter interest with their colorful berries as well as food and shelter for our feathered friends. 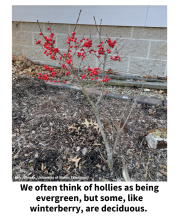 Holly plants belong to the genus Ilex, which is made up of over 800 species of plants, most of which are native to tropical and subtropical areas of the world. Holly plants range in size from small shrubs to large trees. We often think of hollies as being evergreen, and most (around 800 species) are, but there are also some, like winterberry (Ilex verticillata), that are deciduous.

Holly was considered sacred by many cultures. Druids believed that holly would guard against evil spirits and witchcraft. They would use it to decorate the inside of their homes to provide shelter for woodland spirits, who, in return, would be kind to them.

Romans used holly the Saturnalia festival that was held during the winter solstice. They would give each other wreaths made of holly, carry it in processions and decorate images of Saturn (the god of agriculture they were honoring) with it. In the early years of Christianity, many Christians would also decorate their homes with holly to avoid persecution. Over time, holly came to be a symbol of Christmas.

In general, hollies grow best in moist, well-drained soils with an acidic pH. They can be grown in full sun or partial shade. Plants grown in full sun tend to produce more berries than those grown in shadier conditions. Since they are evergreen, it is also a good idea to site them in a location with some protection from winter winds. This will help prevent the leaves from desiccating (drying out). 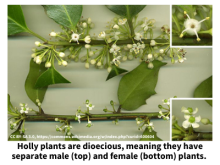 Most species of holly have red berries. Berries may last on plants for three to six months or until birds, and other wildlife have eaten them. Many different songbirds will feed on the berries but often won’t do so until the berries have been exposed to winter weather for a period of time (being frozen and thawed), which makes them more palatable.  Yellow berried plants are often ignored by wildlife until red berries are gone.

While there are hundreds of species of hollies, the species that is probably best known is English holly (Ilex aquifolium). Unfortunately, English holly does not do well in Illinois for several reasons. First, it is only hardy to zone 7, so except for far southern Illinois, it just gets too cold in the rest of the state to reliably grow it. The second is that it does not like hot, humid weather, which Illinois has an abundance of during the summer.

When it comes to growing hollies in Illinois, native species or hybrids are likely going to be the best option.

As the name implies, American holly (Ilex opaca) is native to North America (including a few counties in southern Illinois). It is a slow-growing pyramidal tree that usually reaches 15-30 ft tall in cultivation but can reach 50+ feet tall in the wild. Like English holy, it has evergreen, spiny leaves, and bright red berries. Additionally, there are some cultivars that have yellow berries. It will grow from zones 5-9.

Winterberry (Ilex verticillata) is a deciduous native to North America, including parts of Illinois, that can tolerate poorly drained soils. It grows as an upright shrub with a round form. They are typically between 3-12 feet tall and are hardy from zones 3-9.

Possumhaw (Ilex decidua) is also native to Illinois. They can tolerate heavier soils and wetter conditions. For the most part, these plants are dioecious, like other hollies, but some plants may have perfect flowers, meaning they have both the male (stamens) and female (pistil) parts. They are upright shrubs with a spreading, rounded crown and can reach 7-15 feet tall. They are deciduous and will produce orange-red berries. They are hardy from zones 5-9.

Inkberry (Ilex glabra) is an outlier in the holly world in that it produces black berries. It is native to the east coast and gulf portions of North America. Inkberries are evergreen plants that grow as upright shrubs with rounded habitats. They typically grow from 5-8 feet tall and are often used as a native alternative to boxwood. They are hardy from zones 4-9.

One hybrid holly that is commonly found is Meserve holly (Ilex x meserveae). They typically grow 6-8 feet tall, but some may reach 15 feet tall with a rounded form. They have spiny, evergreen foliage and produce red berries. They are hardy to zone 5.

All of these different hollies have different cultivars that are available. Doing a little research can help you find the holly that that fits your needs and landscape best.

Why doesn’t my holly have berries?

If you have hollies and have had issues with plants not producing berries, there are several factors that can cause this.

One of the more common reasons people don’t get berries on their holly is that they don’t have both male and female plants. If male plants aren’t present, female flowers won’t be pollinated, so berries will not be produced. When purchasing plants, make sure you get at least one male plant. Male plants/cultivars often have male-sounding names like ‘Jim Dandy’ and ‘Mr. Poppins’. Make sure male plants are planted relatively close to female plants.

Weather can also affect flowering. If you are growing a holly that is borderline hardy for where you are located, harsh winter weather may damage plant tissues and lead to reduced flowering. Late frosts in spring may also damage flowers and therefore fruit production.

Good Growing fact of the Week: While we commonly call the fruit of hollies berries, they are actually drupes. Drupes have a hard endocarp (part next to the seed, like the pit of a peach), while berries have a fleshy endocarp.

Want to learn more about hollies and other plants that can provide some winter interest in our landscapes? Check out our Wonderful Winter Interest Good Growing Webinar!

Ken Johnson is a Horticulture Educator with University of Illinois Extension, serving Calhoun, Cass, Greene, Morgan, and Scott counties since 2013. Ken provides horticulture programming with an emphasis on fruit and vegetable production, pest management, and beneficial insects. Through his programming, he aims to increase backyard food production and foster a greater appreciation of insects.