How to protect landscape plantings during drought 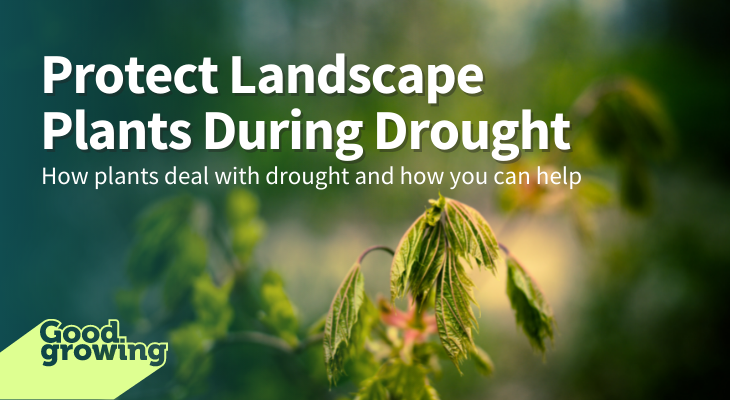 The summer of 2012 saw my first year as an Extension horticulture educator; it also was one of the driest years on record. Illinois saw massive shortages of rainfall that year- complete with water restrictions, loss of crops, and the demise of many ornamental landscapes. It was a summer that will be remembered. So, what are the best practices for getting your landscape plants through a drought?

Due to its slow progression, drought is one of the few weather-related disasters that we can actively work to remediate during the actual weather event. However, drought’s nearly benign presence has a nasty habit of sneaking up on homeowners, especially when it comes to our trees.

Indications of drought are fairly easy to distinguish in our herbaceous perennials, annuals, and many woody shrubs, as these plants tend to wilt during times of water stress. Be mindful of landscape shrubs and small trees like holly that have waxy leaves. These tend not to wilt but simply dry, turn brown, and drop. The same goes for our needled evergreens.

Cool-season lawns have a survival mechanism that allows them to go dormant during hot, dry weather. Dormant lawn grass is straw-colored in appearance and is a slight deterrence to those who enjoy walking barefoot on the lawn. And what a good deterrent it is, because walking on dormant grass risks damaging the growing point at the soil line (a.k.a. the crown) that sends up new leaf blades during active growth. While dormant, your lawn will only need to be watered in the most extreme of droughts. After a month of no rainfall, a dormant lawn begins to run the risk of suffering irreversible death of the crowns. To keep the crown alive during extreme drought Illinois Extension recommends watering ¼- or ½-inch of water every two to four weeks, respectively. That amount of water is enough to keep the crowns alive, but not enough to knock the grass out of dormancy.

Making a plan for watering

During extreme drought communities might face water restrictions; therefore, you must prioritize your watering regimen. Lawns can be seeded and regrown within a year. Perennials and shrubs can be replaced next season. The big-ticket items in our landscapes are our large shade trees. You cannot replace a fifty-year-old tree without investing another fifty years. Unfortunately, many homeowners don’t think to water their mature trees, believing an extensive taproot has made it to some reservoir deep underground. When in fact most trees do not have taproots. Typically, tree roots are found in the top eighteen inches of the soil.

When strategizing your watering make sure to give the following plants priority:

During a drought, when do we need to start watering our trees? A good visual rule-of-thumb is when the soil begins to separate from paved areas and around foundations due to a lack of soil moisture. Timing your irrigation depends somewhat on species, season, and soil type but a general rule is to water slowly and deeply allowing the soil to dry out between watering.

Do not fertilize during drought conditions. Fertilizers promote growth in plants, which is the opposite of what the plants are trying to accomplish as they slow down their processes in response to the drought event. Most mature and naturally established woody plants rarely require fertilizer as they would not have grown in a spot lacking their nutrient needs.

Good Growing Tip of the Week: Don’t have a drip irrigation system? A dripping hose placed within the canopy line of a tree does the trick. And for those spots where the hose can’t reach, a five-gallon bucket with holes drilled in the bottom works just as well.

Chris Enroth is a horticulture educator with University of Illinois Extension, serving Henderson, McDonough, Knox, and Warren counties since 2012. Chris provides horticulture programming with an emphasis on the home gardener, landscape maintenance personnel, and commercial landscapers. Additional responsibilities include coordinating local county Master Gardener and Master Naturalist volunteers - providing their training, continuing education, advanced training, seasonal events, and organizing community outreach programs for horticulture and conservation assistance/education. In his spare time, Chris enjoys the outdoors, lounging in the garden among the flowers (weeds to most).