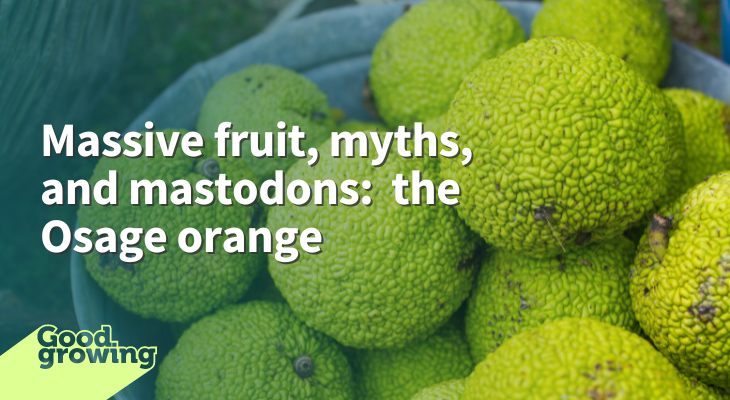 While traveling through the Midwest on leaf peeping adventures, modern day explorers may find a rather nondescript tree with unique, distinct fruit. A medium-sized tree adorned with large, round, chartreuse colored fruit can be easily identified as Maclura pomifera, or Osage orange. Although ordinary in appearance for most of the year, and not often planted today, this species has an extraordinary tale to tell.

Native to the southern United States of Oklahoma, Arkansas, and Texas, this distribution coincides with the ancestral lands of the Osage Nation. The superior wood strength of the species was appreciated by native tribes and used for tools, especially bows for hunting. People would travel hundreds of miles to harvest trees suitable for crafting the weapon to the extent that early French explorers referred to the species as bois d’arc or “wood for a bow”.

Like its wood, Osage orange is an extremely tough tree capable of surviving a wide range of environmental conditions and can be long-lived. According to the Lewis and Clark Trail Heritage Foundation, Osage orange trees grown from slips collected by Meriwether Lewis and sent to Philadelphia remain today. These specimens would be over 200 years old.

As European settlement expanded, the Osage orange became a popular utilitarian tree on homesteads. Prior to the widespread use of barbed wire, the short thorns at the base of Osage orange leaf petioles proved useful as a living fence. Its insect and rot-resistant wood proved useful as fence posts and building material. The dense wood, if dried, provides higher heating value than other species of wood by burning hotter and longer.

Midwestern folklore commonly expounds the insect, arachnid, and rodent repelling value of the Osage orange fruit. Recent studies have tested this theory and have mixed results. Anecdotal evidence indicates that there are no spider or rodent repelling qualities to the fruit. However, some of the chemical compounds in Osage Orange act as a mosquito repellent. The efficacy of the fruit compounds as a repellent resides in extraction processes, concentration, and residual capabilities.

Why such large fruit?

Aside from being a distinct identifying characteristic, why does Maclura pomifera produce such large fruit? To better understand the significance of fruit size, it is important to consider the purpose of fruit production.

Seeds are produced as the result of sexual reproduction which perpetuates a species. Many strategies for seed dispersal have evolved from being light enough to be carried by a breeze, to appendages that cling to the fur of animals and hitching a ride to another location, or by being edible to be passed through the intestine of an herbivore and deposited elsewhere.

Osage oranges are pome fruit or fruit that has a core of seeds inside an edible fleshy casing. Better known examples of pome fruit include apples and pears. Straight species of these fruits are significantly smaller in size than those found in the grocery…those larger fruits are a result of breeding programs. The smaller fruit of apples and pears are consumed by wildlife in a symbiotic relationship: animals get a meal, and plants get to migrate.

Osage orange fruit is far too large to be consumed by wildlife species roaming our landscape today but not those of the past. It seems that Osage oranges are anachronistic fruit, meaning they belong to another time. Scientists hypothesize that the Osage orange belongs to the Age of Great Mammals, also known as the Pleistocene, when herbivores far larger than any that remain today roamed North America. Fossil records tell of megafauna roaming the North American landscape including mammoths, mastodons, ground sloths, and glyptodon. Similar to mammals of today, these megafaunas would have dispersed seeds of vegetation they consumed. The Osage orange, perhaps, developed large fruit for these prehistoric megafaunas.

Today people are primarily responsible for the transport and species migration of Osage orange. Although some small mammals will dine on the fruit, it does not fully explain the evolutionary strategy of such large fruit.

Good Growing Fact of the Week: The Osage orange cultivar Maclura pomifera ‘White Shield’ has few to no thorns and bears no fruit.

Sign up for our emails! Want to get notified when new Good Growing posts are available? SIGN ME UP