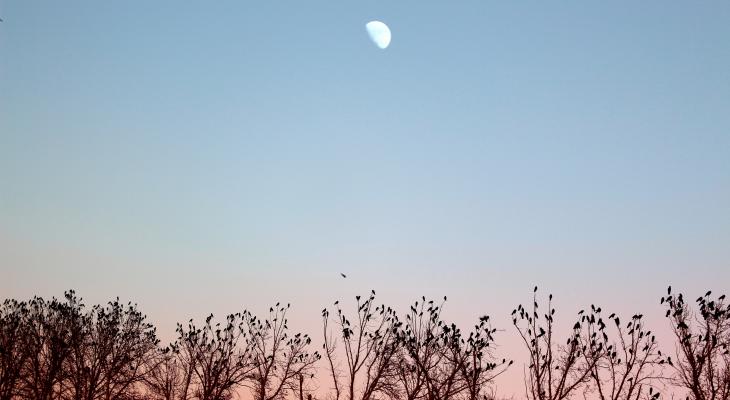 When I sat down to write this blog, I didn’t have a clear topic in my mind. So, I did what I usually do when I want to think and looked out my office window. Through this window, I can see just the tops of three oak trees which today were covered with crows. I counted more than two dozen with more constantly coming and going. And I knew fall was well and truly upon us.

Where I’m located in Galesburg, in West Central Illinois, we are known for trains but in the fall the crows come “home” to roost. The seasonal flocking of certain types of birds is well documented and the American Crow, Corvus brachyrhynchos, is one of those birds. Found across much of the continent and in every county in Illinois, crows are large, intelligent, solid black birds with a distinctive loud caw. They are in the same family as ravens and rooks.

The crow fall migration is not a sudden or singular event. In late summer to early fall the birds begin to congregate in small groups. Over the weeks, the roosts get bigger, reaching their peak in mid-winter. In Illinois, crows from more northern states migrate south and some Northern Illinois crows relocate to Central Illinois. Galesburg has a year-round population of crows that swells in the fall with other individuals joining the flock. These same crows will start their return trek northward come February or March.

While gathering in larger and larger roosts, the crows will still maintain their smaller group identities. During the day the roost will separate into those smaller groups to feed. They will then gather later in the day, first at a secondary roost spot and later at a final roost spot.

How to tell the difference between a crow and a raven

Crows and ravens are often mistaken for the other as both are large, black birds. But there are a few key differences. If you look at a crow and think, “That is the biggest crow I have ever seen” it just might be a raven.

Crows in folklore and fiction are often associated with trickery and death. After all, a group of crows is known as a murder. But research has shown that crows are extremely intelligent, in the same range as chimpanzees. They are one of the few animals that have been observed using tools. One example is a captive bird who dipped a cup into water to moisten some dry food. Another example is a wild bird ripping a splinter off a fence to use as a tool to spear prey in a hole.

Researchers at the University of Washington conducted an experiment where they captured seven crows in a net while wearing a caveman mask. They then released the birds onto the campus. When researchers walked across campus wearing the mask, they were divebombed and scolded by the crows. This continued to happen for more than 10 years with more than half of the crows on campus raising the alarm when seeing the mask.

Crows learn from each other

Crows also have been shown to hold “funerals” and “wakes”. When a crow finds a dead crow, it will sound an alert that brings other crows in the area to the site. They too will begin to make a ruckus. Scientists hypothesize the behavior helps the crow learn about potential threats and they know which areas and predators to avoid in the future. This communal learning is possible because the crow is a very social and family-oriented bird.

They form close family units of up to five generations. Yearlings and 2 year-olds will help their parents in rearing the next generation. They may help build the nest, keep it clean and even bring food for their mother while she sits on the nest.

These are just a few of the facts that make the crow a fascinating part of the natural world. If you would like to know more, I recommend the book, "In the Company of Crows and Ravens," a general overall look at Corvids in an easy-to-read format, or "Gifts of the Crow," which is a scientifically dense read on crow behavior and neurobiology. Both are by John Marzluff and Tony Angell.

For more about ravens, I highly recommend Bernd Heinrich’s "Mind of a Raven." Heinrich is an eloquent and engrossing nature writer and I recommend his books regardless of the subject.

MEET THE AUTHOR
Wendy Ferguson coordinates the Master Gardener and Master Naturalist programs in Henderson, Knox, McDonough, and Warren Counties. Wendy earned a BS in Environmental Studies from Eureka College and a MS in Environmental Studies with an emphasis on writing and communication from Green Mountain College. She is interested in facilitating a deeper connection to place for community members through nature journaling and education.

ABOUT THE BLOG
Naturalist News is a blog by University of Illinois Extension Master Naturalist staff and volunteers who bring you stories highlighting the individuals, places, wildlife, and plants that make this state amazing. Join us each week to learn something new, be inspired and become connected to your own community by recognizing the amazing ways we are all intertwined. Want to get notified when new Naturalist News posts are available? SIGN UP HERE.