A personal run-in with the invasive gypsy moth 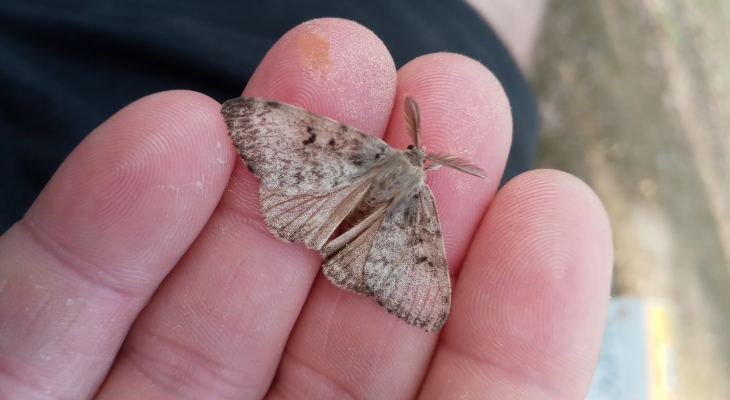 My family and I recently traveled out of state to drop my oldest daughter off at a summer college program. We were taking this opportunity to do some camping and exploring of the public lands in the upper Midwest. As we traveled down a forest-lined highway en route to our planned national forest campground, we were astonished that, for literally miles, almost every tree in sight was completely devoid of leaves even though it was in the middle of summer.

Not knowing what was going on, I had to stop for a closer look and discovered that this eerie landscape was the result of a very bad outbreak of gypsy moth (Lymantria dispar), an exotic moth species with an affinity for hardwood leaves. When we stopped at a rest area, every tree was surrounded by a cloud of flying moths. These were the male gypsy moths following pheromone scent trails to try and find the flightless females. Thousands of moths were in the air all around us. I’ve seen gypsy moth in the past, but nothing like this.

At our campground, the story was the same. All of the trees, with the exception of the red maples, were completely defoliated and gypsy moths were abundant. It is hard to overestimate how many adult gypsy moths were flying in those forests. Everywhere you looked were more and more moths. It took a concerted effort to keep the moths out of our tents and vehicle, demonstrating how easy it is to accidentally spread this species to new areas.

Gypsy moth was first introduced to the northeastern United States in the 1860s as a potential resource for the silk market. Though that potential was not realized, the moths quickly escaped and began spreading west and south into the rest of the United States.

Larvae have five pairs of blue spots and six pairs of red spots along their backs. Adult male moths have brownish wings and feathery antennae. Female moths are white and have thread-like antennae.  Female moths do not fly. The adults do not feed and only live about a week. After mating, the females will lay buff-colored egg masses on tree trunks, branches, vehicles, stone, or any hard surface.

It is the larvae that do the damage. Gypsy moth larvae will eat the leaves of nearly any hardwood tree species, but really prefer oaks. A heavy infestation can completely strip all the leaves from a large tree in a manner of days as we saw on this trip. Our campground had a strange feel to it. We were underneath a canopy of mature oaks, but had no shade. It sort of looked like early spring in terms of trees without leaves, but if you looked closer you could see many petioles and leaf veins still hanging on the trees, remnants left over after the feeding frenzy.

Defoliation from gypsy moth, like what I saw on my camping trip, will not immediately kill a tree. The trees can refoliate and continue. A single defoliation event is not that impactful to a tree, but repeated defoliations every year will weaken a tree, leaving them susceptible to disease and environmental stressors. Add to that the environmental changes to the ecosystem that comes with a near-complete loss of the tree canopy in mid-summer. Humidity and light levels to the forest floor are drastically changed and food resources for native foliage-feeding insects are gone. Gypsy moth infestations have a huge impact to both the trees and the forested ecosystems.

Fortunately, active management of gypsy moth is underway on a national scale.  You may have seen little green triangular paper boxes hanging on trees. Those are pheromone-baited traps used to monitor gypsy moth. These traps of placed in a grid across the landscape. More than 60,000 traps are used each year across the United States, including more than 11,000 in Illinois. They are part of the national Slow the Spread Program. This program, jointly funded by the US Forest Service and USDA Animal and Plant Health Inspection Service (APHIS) and involving many other partners, is an effort to monitor the spread of gypsy moth, detect new populations, and strategically implement control efforts targeted to reduce the rate of spread.

This program has been incredibly effective at keeping gypsy moth in check at the edge of its range, including in Illinois. In the 20 years since Illinois first established a quarantine for gypsy moth in Lake County, the quarantined zone has only expanded to eight counties in the northeastern corner of the state. Compare that to Emerald ash borer, which was first found in Illinois in 2006 and has since spread across the entire state and has been recorded in more than 60 counties.

The program in Illinois, directed by the Illinois Department of Agriculture, uses a combination of direct control using BtK (a naturally occurring bacteria that kills caterpillars) and mating disruption (swamping an area with synthetic pheromone, preventing male moths from being able to follow pheromone trails and find females to mate with). By conducting these strategic treatments, the Illinois Department of Agriculture has been able to protect Illinois forests and reduce the impacts from this invasive species.

Seeing this severe and expansive outbreak of gypsy moth in the upper Midwest made me appreciate the work of the Illinois Department of Agriculture, US Forest Service, and the USDA APHIS all that much more.

What can we do to help?

I hope to never see a gypsy moth outbreak in Illinois as bad as the one I saw camping in the upper Midwest, but I am glad to have had that first-hand experience, so I know better the threat of this species to Illinois.